GRSE (Garden Reach Ship Engineering), Calcutta one of the leading shipyards of the country is all set to launch the last vessel being built under the P-28 program. The vessel will be cherished as Kavaratti.

The need for specialized ASW platforms

Chinese have been inducting submarines to their fleet at an alarming rate. Adding attack submarines alone cannot address this, adding specialized vessels and aircraft can greatly subdue the threats posed by submarines along our coastline. Corvettes are one of the smallest warships, these vessels are fitted with missiles and torpedoes. The vessels can also accommodate anti-submarine helicopters thereby forming a credible force in anti-submarine warfare. Submarines operating in shallow waters close to the shores are matter of grave concern, with various countries building submarines that have the lowest acoustic levels, and it is crucial that India ramps up its anti-submarine warfare capabilities.

Under the P28 program, Indian navy has drawn up elaborate plans to induct about four corvettes, which will serve as dedicated ASW platforms. Stressing for a more flexed ASW capability, navy made away with the P28A program which has promised them with eight more corvettes. The corvettes being designed under the P28 program have been designated as the Kamorta corvettes which will displace around 3400 tonnes, these vessels can even be designated as miniature frigates owing to the size.

The vessels are powered by four diesel engines which are supplied by Piestel, which together produce about 5096 HP of power and guarantee a maximum speed of up to 32 Kn. DCNS supplied raft mounted gearbox which helped to greatly subdue the vibrations of the engines. High quality steel was provided by SAIL, Wartsila provided low-vibration diesel alternators to power the electronics on-board the vessel. The vessel would also incorporate stealth features, an X-shaped hull was incorporated and the ship was developed with carbon fibre reinforced plastic which reduced the weight of the ship substantially. These features greatly reduced the acoustic signature and the noise levels of the vessel.

The primary radar of the vessel is the DRDO developed Central Acquisition Radar or the CAR-3D, the Rohini was a dedicated radar for Naval platforms. Operating under S-band, the radar employs planar array antenna and provides simultaneous multi-beam coverage. The radar can track up to 150 targets simultaneously, and has a maximum operational range of 180 km. The vessel also houses the IAI developed, EL/M STGR (Search, Track and Gunnery Radar) fire control radar. The radar is all weather radar operating in X and Ka band, the radar is equipped with state of the art ECCM measures. The radar can acquire a missile at 15 km and an aircraft at around 30 km. BEL has significantly helped the ship’s designing and has integrated its Shikari, RAWL02, Sanket MKIII systems helping to increase the readiness of the ship.
Detection systems

The P-28’s, main detection system is the hull mounted SONAR system which was supplied by BEL. Modern warships are usually equipped with HUMSA. These systems are tasked with detecting and calculating, the enemy ship and submarine position. The SONAR also acts as the eye of the ship, by directing the ship along its intended path and averting any mishaps.

The vessel will also feature Towed array sonar (TAS), a crucial system to detect any tow ships but yet many Indian vessels lack this crucial system. As the name suggests, these sonar systems are towed by the ship meaning they’ll be attached to the rear of the ship. The system can be integrated with other ships through secured channels, hence promising alertness across the waters. The TAS is extremely hard to be detected unlike the hull mounted SONAR systems, effectively enhancing the ships stealth capability. TAS is being developed by DRDO and NSTL, the DRDO produced TAS had failed to impress the navy and was procured from abroad. 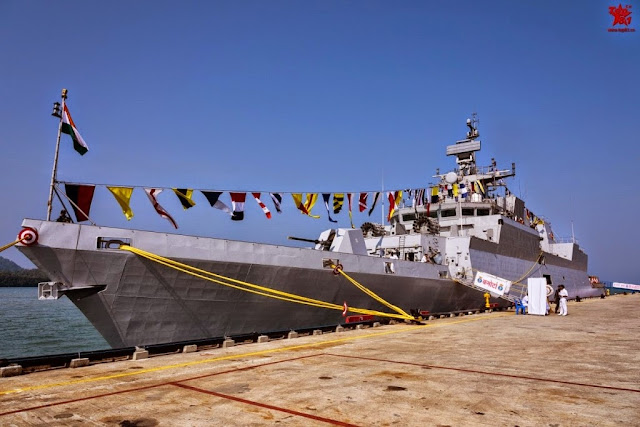 The vessel is equipped with a defensive suite that can handle threats posed by any air, surface or submerged targets. To tackle any air-borne threats the ship is fitted with thirty two VLS cells which can launch Barak-1missiles. The Barak-1 can even neutralize sea skimming cruise missiles. The Israeli developed, Barak-1 is a battle proven point defense missile system which enjoys a range of about 12 kilometers.

The ship is also equipped with two AK 630 CIWS (Close-in-weapon system) these systems are crucial to pick up target which the SAM systems may miss owing to the size of the inbound threats. These CIWS have an approximate operational range of up to three kilometers. The vessel is also fitted with Chaff and flare systems, the ECM (Electronic Counter Measure) system in the ship is believed to be one of the best in service and can effectively guard the location of the ship by feeding false inputs to the enemy systems.

To tackle any inbound torpedoes fired by an enemy ship or submarine the vessel is fitted out with an indigenously developed torpedo decoy system, which launches torpedoes to counter any threats by engaging the incoming threat.

Being a mainstay vessel for conducting ASW operations, the vessel is equipped with six 533 mm torpedo tubes. The 533mm torpedo's are battle proven machinery which can penetrate even hardened hulls. To tackle the evasive moves of the submarine the vessel uses its depth charges which will force any underwater threat to surface.

The ship comes with two RBU 6000 multi-caliber rocket launcher which can launch 213 mm rocket, these rockets can intercept and destroy any incoming torpedo's and at times can also be used against submarines, the recently inducted 90R rockets can hit targets submerged in deep waters.

The primary offensive system of the vessel is the Oto Melera 76 mm main gun which can neutralize targets as far as twelve kilometers. The ship can also house an ASW helicopter, the Indian navy had chosen the American S 70 B but the plans to procure these helicopters has stalled owing to the scandals that has tagged the procurement process. The ship is NBC capable, meaning the ship can withstand any Nuclear, Chemical and Biological attacks.

The first ship of the class, Kamorta was commissioned to the navy by Arun Jaitley , then MoD and currently operates under the Eastern Naval Command(ENC) and is home-ported at Visakhapatnam. The second vessel of the class, Kadmatt has entered its final test phase and is to be shortly commissioned to the navy. The third vessel under the program has reached final work phase and is to be soon launched for trials. 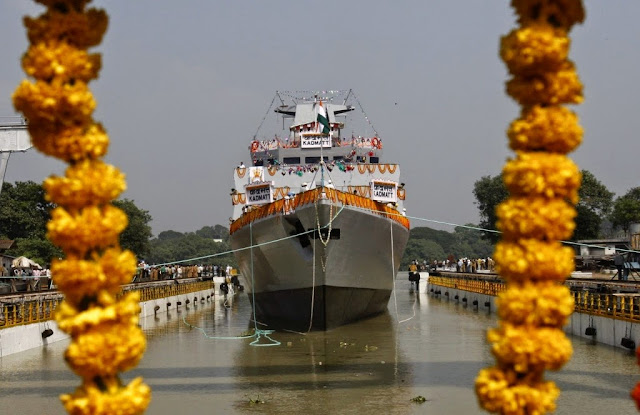