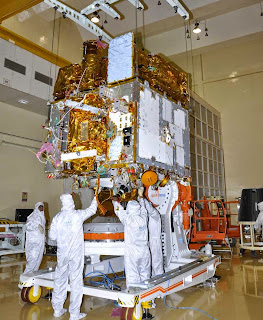 The project was conceived following the success of the Indian X-Ray Astronomy Experiment, carried on a remote sensing satellite launched in 1996.
The government cleared the Astrosat project In 2004 at a cost of Rs. 178 crore. The satellite was planned to be launched in about 4 years.

"Most astronomical objects in the known Universe emit radiation spanning the complete electromagnetic spectrum stretching from long wavelength radio emission to extremely short wavelength gamma rays. Hence for a detailed understanding of the physical processes that give rise to frequency-dependent, time-variable phenomena, it is essential to carrry out nearly simultaneous multi-frequency observations. Important areas requiring broad band coverage include studies of astrophysical objects ranging from the nearby solar system objects to distant stars, to objects at cosmological distances; timing studies of variables ranging from pulsations of the hot white dwarfs to active galactic nuclei (AGN) with time scales ranging from milliseconds to few hours to days."


Research Institutions Involved with the Project
Other research institutions contributing to the collaborative effort of the project include:
Launch and Orbital Parameters
The 1,650 kg satellite with a science payload of 750 kg is scheduled to be launched in the second half of 2015 atop PSLV C-34.
It will be placed in a 650-km (400 miles) orbit with an 8° inclination for spectroscopic studies of X-ray binaries, supernova remnants, quasars, pulsars, galaxy clusters and active galactic nuclei at a number of different wavelengths simultaneously, from the ultraviolet band to energetic x-rays.

Project Progress
The satellite is planned to be launched during the second half of 2015 by PSLV C-34 to a 650 km near equatorial orbit around the Earth. It is significant to note that ASTROSAT is the first mission to be operated as a space observatory by ISRO.

ISRO in a press release on May 19, 2005 stated, "All the payloads and sub-systems are integrated to the satellite. Mechanical fit checks of the satellite with PSLV payload adaptor were performed successfully. Last week, the spacecraft was fully assembled and switched ON. Spacecraft parameters are normal, which indicates everything is functioning well. In the coming days, Spacecraft will undergo several environmental tests like Electromagnetic Interference (EMI) – Electromagnetic Compatibility (EMC), Thermal Vacuum, Vibration, Acoustic tests before shipment to Satish Dhawan Space Centre, Sriharikota.

The Hindu in July 2012 that the telescope took 11 years to develop. It has 320 mirrors of aluminium that had to be made with great precision and given a fine gold coating. These mirrors were arranged in the form of concentric shells, with struts to hold them in place. They had to be positioned with an accuracy of 20 microns, which was less than the width of a human hair.

Attitude Control System
TIFR is also developing the satellite’s attitude control system, consisting of two star trackers and gyros, to facilitate accurate pointing of the instruments towards a specific direction in the sky.
The challenges associated with developing the Attitude Control System have been overcome and delivery of the payload to the ISRO satellite center will begin from the middle of this year.
In particular, it will train its instruments at active galactic nuclei at the core of the Milky Way that is believed to have a super massive black hole. 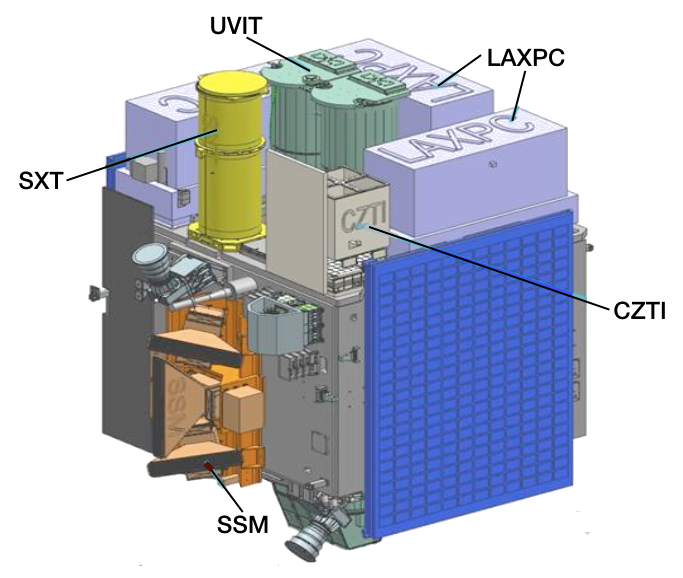 ASTROSAT will carry five astronomy payloads for simultaneous multi-band observations:
ASTROSAT will be a proposal-driven general purpose observatory, with main scientific focus on:
Open observing time on ASTROSAT will start one year after launch, for which proposals will be invited from the astronomy community. The primary data archive for ASTROSAT will  be located at the Indian Space Science Data Centre (ISSDC) near Bangalore, India.
The Ground Command and Control Centre for ASTROSAT will be located at ISTRAC, Bangalore, India. Commanding and data download will be possible during every visible pass over Bangalore. Ten out of 14 orbits per day will be visible to the ground station.

Astrosat is India's first dedicated astronomy satellite and is scheduled to launch on board the PSLV in 2015. Based on the success of the satellite-borne Indian X-ray Astronomy Experiment (IXAE), which was launched in 1996, the Indian Space Research Organization (ISRO) approved (in 2004) further development for a full-fledged astronomy satellite ASTROSAT An X-ray astronomy experiment for the study of spectral and temporal characteristics of cosmic X-ray sources was developed jointly by TIFR and ISRO Satellite Center (ISAC). The payload consists of three identical pointed proportional counters (PPC) and one X-ray Sky Monitor (XSM). Each of the detectors are controlled by independent microprocessor based processing electronics. A common electronics sub-system acts as an interface with the satellite bus. An oven controlled oscillator (accuracy one part in 109) provides high timing accuracy. The Indian satellite IRS-P3, carrying the X-ray astronomy instruments was launched on 1996, March 21 with Indian Polar Satellite Launch Vehicle PSLV-D3 from Shriharikota Range, India.​

A large number of leading astronomy research institutions in India and abroad are jointly building various instruments for the satellite. Important areas requiring broad band coverage include studies of astrophysical objects ranging from the nearby solar systemobjects to distant stars, to objects at cosmological distances; timing studies of variables ranging from pulsations of the hot white dwarfs to active galactic nuclei with time scales ranging from milliseconds to few hours to days.


The Astrosat project is a collaborative effort of a growing list of research institutions. The current participants are:


ASTROSAT will be a proposal-driven general purpose observatory, with main scientific focus on:

Astrosat will carry out multi-wavelength observations covering spectral bands from radio, optical, IR, UV, X-ray and Gamma ray regions both for study of specific sources of interest and in survey mode. While radio, optical, IR observations would be coordinated through ground-based telescopes, the high energy regions, i.e., UV, X-rays and Gamma rays would be covered by the dedicated satellite borne instrumentation of Astrosat.


The mission would also study near simultaneous muti-wavelength data from different variable sources. In a binary system, for example, regions near the compact object emit predominantly in X-rays, the accretion disc emitting most of its light in the UV/optical waveband, whereas the mass of the donating star is brightest in the optical band.


The observatory will also carry out:

In particular, the mission will train its instruments at active galactic nuclei at the core of the Milky Way that is believed to have a super massive black hole.


The scientific payload has a total mass of 750 kg and contains six instruments.


The Ground Command and Control Centre for Astrosat will be located at ISAC, Bangalore, India. Commanding and data download will be possible during every visible pass over Bangalore. Ten out of 14 orbits per day will be visible to the ground station. The satellite is capable of gathering 420 gigabits of data every day that can be down loaded in 10 to 11 orbits visible at Tracking and Data receiving center of ISRO in Bangalore. A third 11-meter antenna at the Indian Deep Space Network (IDSN) was operational in July 2009 to track Astrosat.