Tactical fighter. Designed OKB-155 (Mikoyan Design Bureau and M.I.Gurevicha). Work on the fighter began in 1952. In the summer of 1953 the Resolution of the Council of Ministers of the USSR, which were instructed to begin the development of aircraft designed for hypersonic speeds.

The OKB Mikoyan began work on the project E-1 fighter with swept wings and engine AM-11 design AA Mikulin. Due to the delay of the aircraft engine development project has been modified for installation of the engine AM-9B with a thrust of 3250 kg of the MiG-19 .

The new fighter was a cipher E-2, it is different from the E-1 aerodynamic ridges under the aft fuselage and the split slats. At the same time, work began on a version of the E-5 fighter with a delta wing and the same engine AM-11. For the same reason the project was changed to E-4 engine AM-9B with a thrust of 3250 kg.

The first prototype with swept wings E-2 (later named the MiG-23 - the first with this name) made ​​its first flight 14 February 1955 ( Test Pilot G.K.Mosolov). The first prototype with a delta wing E-4 was built in 1955 and first flew on June 16, 1955 (test pilot G.A.Sedov). In tests, the E-4 showed the maximum speed of 1296 km / h while the C-1 on tests of the Sukhoi Design Bureau has exceeded 2000 km / h. In the process of finalizing the aircraft E-4 replaced the wing - instead of one large aerodynamic ridge located under the wing, installed three small over the wing, wing tips cut off. RD-9B was replaced by RD-9And.

MiG-21F-13 board №84 "red" squadrons "aggressor" US Air Force. The aircraft was previously in the Indonesian Air Force. Aerodrome Tonopah, 1986 ( http://airwar.ru ).
Under the forced variation of the engine AM-11 - the product "37F" - was launched to provide an improved MiG-21 - E-6 aircraft. The first flight of the E-6-1 made ​​May 20, 1958 (test pilot - V.A.Nefedov). The aircraft features a new engine and design improvements (see. Below). During the seventh flight of the E-6 (Test Pilot - V.A.Nefedov) after stopping the engine at an altitude of 18,000 m car crash landed, and the test pilot was killed. After this disaster from the plane E-6-2 has been removed electric control system, hydraulic and has been dubbed. Test three aircraft E-6 were in LII and mostly in Krasnovodsk in 1958-1959 GG Identified the main performance characteristics of the future MiG-21F.

The design - cantilever monoplane of normal aerodynamic configuration with a triangular plan tselnopovorotnym swept wing and stabilizer. The air intake - a supersonic multi-mode variable input section (due to the moving of the central body). The prototype E-6 (the future MiG-21F) differed from the E-5 / MiG-21 improved aerodynamics bow fyuzhelyazha, which established a new front with a fine cook lip and dvuhskachkovym cone. By increasing the speed of the aircraft air flow to the engine, to regulate the movement forward of the cone is not as smoothly as on the E-5, and the two races - for speeds 1,4-1,5M and 1.9M. In addition, several dropped down horizontal tail, have established a new standard equipment, improved the wing by holders rockets. System Rescue Crew: SK ejection system provides safe evacuation of the airplane at speeds up to 1100 km / h. The canopy opens upward and forward zazizaya pilot during ejection from the incoming air flow. 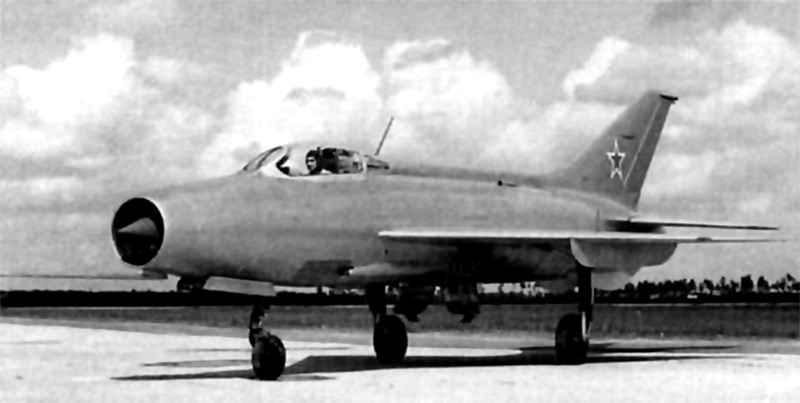 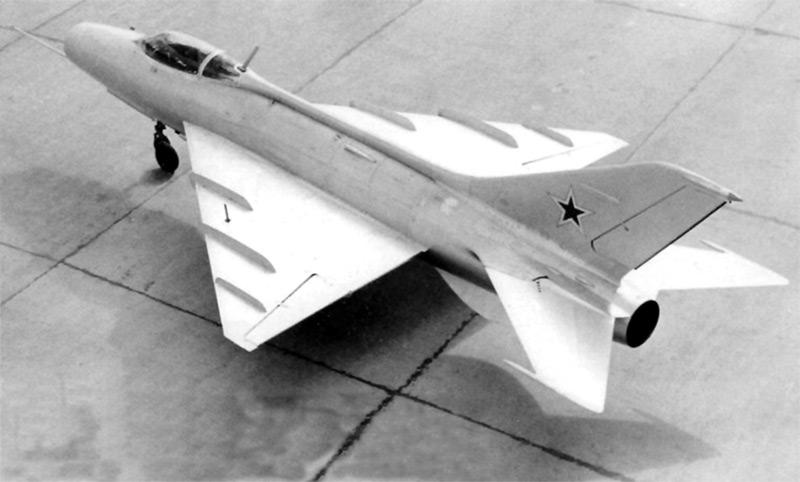 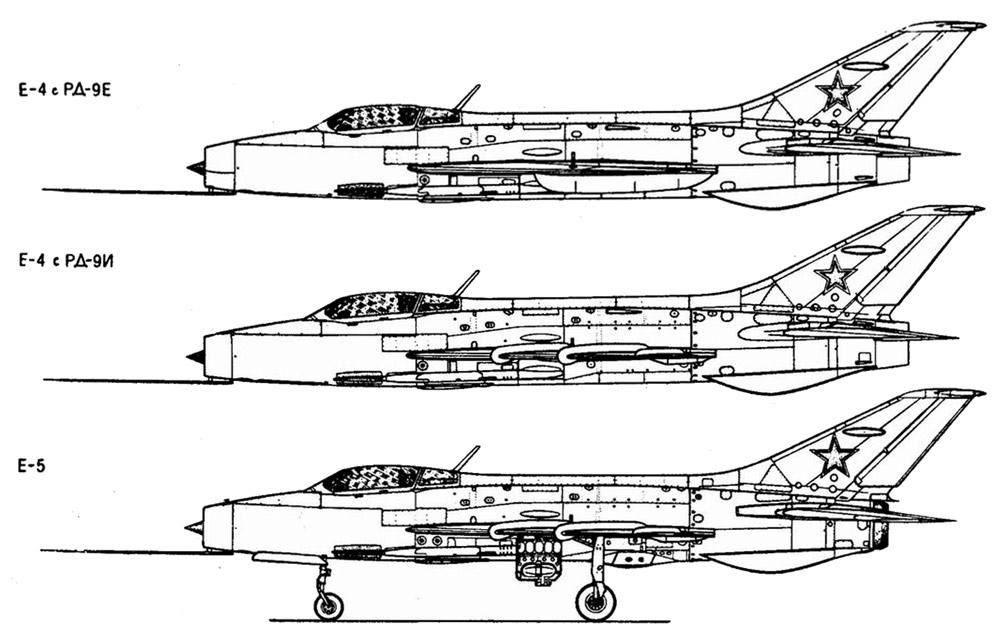 The decree provides alterations in the MiG-21F and testing of two copies of the MiG-21 in the 4th quarter of 1959 is also the plant were ordered to cease production of the MiG-21 engine P-11-300 and secure the release of 12 MiG-21F. In the prototype of the MiG-21F / E-6 provides for the replacement of guns with HP-30 TKB-515, as well as the installation CD-30 radar and missiles "air-to-air."

The first flight of the E-6-1 made ​​May 20, 1958 (pilot - V.A.Nefedov). - E-6-2 - the second prototype fighter prototype of the MiG-21F (September 15, 1958, the pilot - KK .Kokkinaki). After 15 flights in LII plane was relocated in g.Krasnovodsk. Total program of factory tests aircraft made ​​46 flights, it has been replaced by three engines. In 1959 we finalized the airplane under suspension of R-3C at the ends of the wings - test changed the shape of the wing in the plan and about the middle of its sweep reduced from 57 degrees to 48 degrees.

The ends of the new wing have a greater slice them fastened launchers APU-13 missiles.Such a scheme suspension missiles tested in the Soviet Union 6-2 in the E-September 1960 to April 1961, however, assessed the results of the tests, the designers did not implement end the suspension of a series of rockets. - E-6-3 - the last pre-production prototype of the MiG -21F (1958). For the tests the aircraft entered the Krasnovodsk in December 1958 Tested application blocks NUR UB-16-57U. 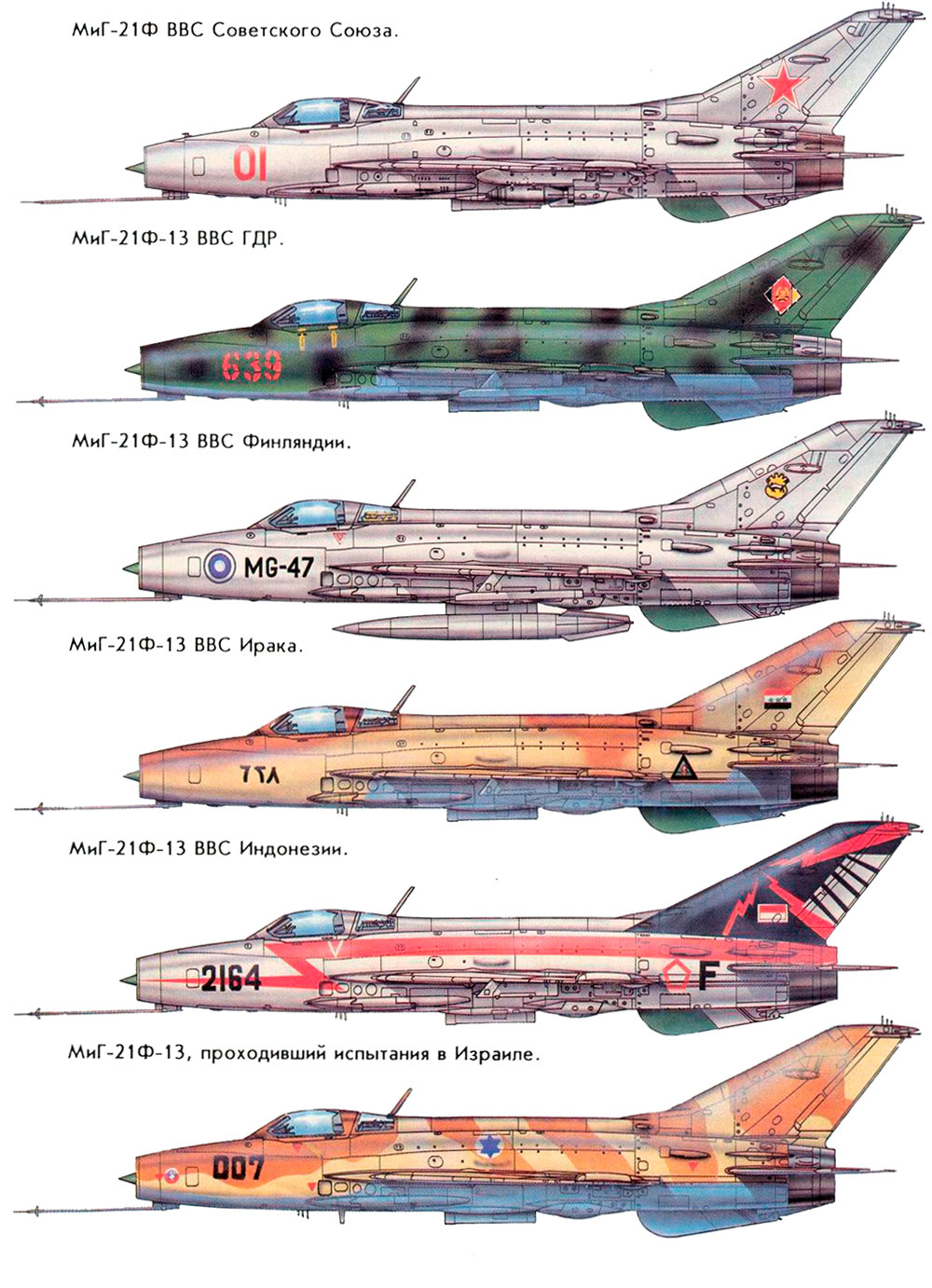 Unlike mass-produced cars in the E-6B were installed nondisplacement landing flaps and tail support with shock absorber and roller located in the ventral fins. The system of blowing boundary layer (PCA) previously tested on one of the prototypes, has been disabled. The tests, conducted in July and August 1963 showed that when landing with a large angle of attack fighter has a small margin of longitudinal stability, greatly complicates review deteriorated steering technique and requires special training pilot.