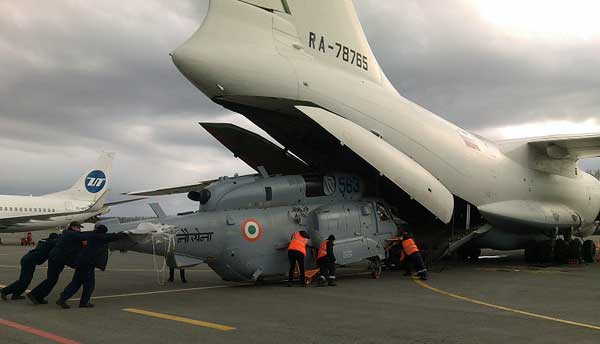 Russian Helicopters (part of State Corporation Rostec) has delivered the first two repaired Ka-31 helicopters, produced by Kumertau Aviation Production Enterprise (a Russian Helicopters company), to India.
In 2004, Kumertau Aviation Production Enterprise supplied nine Ka-31 helicopters to India. Six needed comprehensive repairs before their first scheduled overhaul, and were sent to Kumertau for this work to be completed. The first two have been returned to India for continued operation. The remaining helicopters are due to be delivered in the near future.

A total of 14 Ka-31 helicopters were made for India. A special service centre in Goa was established for their maintenance. Every year, specialists from Kumertau Aviation Production Enterprise travel to India to service these helicopters.

India’s armed forces rate the Ka-31 very highly, thanks to its ability to detect and track a large number of targets. The Ka-31 boasts a powerful on-board early radar warning system, with a powerful retractable radar antenna for panoramic visibility.

The Ka-31 is designed for the radar protection of air and sea space, the early detection of ships or low-flying aerial targets (winged missiles, helicopters, planes). The helicopter’s equipment identifies the detected targets, and captures details regarding their location and trajectory, transferring information on the radar situation to vessels and armed forces’ command posts.


The long-range early warning system was developed on the basis of the Ka-29 military transport helicopter. It can be deployed on ships and coastal aerodromes. The helicopter can also be used for the air-defence of ground troops.
Posted by Nayeem Sheikh at 02:23