Securing the waters pertaining to India’s interest is set to acquire a whole new dimension, with the entry of versatile autonomous underwater vehicles (AUV) and submadrones, as force multipliers. While the Indian Navy is planning to indigenously source 10 such platforms mainly for intelligence, surveillance, and reconnaissance (ISR), mine mitigation and sensor deployment, the Defence Research and Development
Organisation (DRDO) has come a long way in designing and building a batch of multiple AUVs to meet the Navy’s quality requirements.

The defence minister Manohar Parrikar had recently informed the Parliament that DRDO has undertaken a feasibility study for the development of different types of AUV platforms that could be used for a variety of roles, like surveillance and mine counter measures etc; from hand-held slow-speed ones, to military-class, free-flooded platforms weighing 1.7 tonnes, with the capability to assist in the entire gamut of maritime security, straddling coastal and port defence to deep-sea operations. 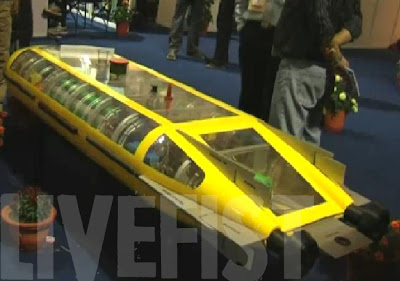 DRDO NSTL AUV
​
AUV is an autonomous underwater vehicle and commonly known as unmanned underwater vehicle. AUVs can be used for underwater survey missions such as detecting and mapping submerged wrecks, rocks, and obstructions that can be a hazard to navigation for commercial and recreational vessels. What DRDO has designed for the Indian Navy is four-metre long, 1.4-metre wide, flat fish-shaped vehicle which can travel at a speed of about 7 km per hour at depths of up to 300 metres below sea level. The robotic vehicle is fully pre-programmed—in terms of algorithms and strategy, and mission requirements – and piloted by an on-board computer. There is no control of the vehicle once it is released into water. But, if the AUV deviates from its intended path, the guidance and control systems activate the propellers (technically called ‘thrusters’) and control planes to ensure that the vehicle returns to the original trajectory and continue moving along the desired path.

AUVs are the alternatives to the remotely operated vehicles (ROVs), which are controlled and powered from the surface but often prove to be inefficient at the places where communication between the operator and robot is constrained. With the development of the AUV, DRDO has enabled India to be at par with nations like US and Japan with such indigenous technology. The testing of this remotely operated vehicle has been done by DRDO and the programme has achieved objectives. The AUV project involves the Electronic Corporation of India (ECIL), Hyderabad, as the concurrent engineering partner. The cost of the AUV is roughly $8.4 million and it will augment underwater surveillance capabilities of the Indian Navy.

The AUV, which is very small in size and operates around a mother ship from where it is launched, controlled and recovered, is expected to aid the Indian Navy in surveying waters and help in the deterrence of hostile ships or submarines. Developed from a concept vehicle weighing 300 kg, the AUV has two interconnected cylindrical pressure hulls. Its multi-sensor intelligence robotic architecture provides for underwater monitoring and communication. Since the thrusters are inside the pressure hulls, vibration is next to nil. Vehicle deployment is done by a ship-independent launch and recovery system developed by R&D Engineers, Pune, another DRDO lab. DRDO has done extensive work in terms of harnessing various aspects of hydro-dynamics as well as the integration of control and guidance in the AUV. The technology is aimed to be transferred to industry through mission mode projects based on specific application and requirements.

The Indian Navy has been impressed by the DRDO’s AUV that has undergone user demonstrations and has already elicited deep interest from the maritime forces following navigation trials at sea. DRDO’s naval science and technology laboratory (NSTL) in Visakhapatnam is also trying to develop a variant of the AUV that can conduct more frontline activity like mine-laying. The AUV, smaller than the AUV-150 developed by the Central Mechanical Research Institute (CMERI), will have passive sonar and electro-optical sensors.

In-house technologies already available with the Naval Science and Technology Laboratory (NSTL), such as mission computer system (MCS), integrated instrumentation and recording system (IIRS), power management system (PMS), and electrical systems, were adopted for the development of the AUV.
Posted by Nayeem Sheikh at 22:37