THE FARCE THAT IS SHAHEEN III

Note the Original Chinese Missiles and the dolled up Pakistani versions

In the mid 1990's China supplied around 30 knocked down M-11 missiles to Pakistan, which also included launch platforms. It is reported that more than 80 M-11 missiles were delivered. It is also widely acknowledged that China provided the blueprints for a 1966 design of a U-235 nuclear-implosion device. This missile warhead was reported to weigh about 1,300 kilograms with a yield of upto 25 kilotons.

The Shaheen-I missile is China's M-9 missile, which Islamabad acquired in 1991 but had kept under wraps for fear of sanctions. Pakistan is believed to have a capability to deploy a nuclear warhead weighing around 500 kilograms. If its ascribed range/payload curve proves out, the Hatf-4 / Shaheen would have sufficient range from relatively secure positions west of the border with India.

In 1992 US satellite images showed M-11 missile canisters being delivered at Sargodha air base near Lahore, Pakistan. The Clinton administration concluded that China may have already transferred the M-11 missile system and its technology to Pakistan, and in August 1993 the US announced its sanction against China for selling missile components to Pakistan that were barred under the Missile Technology Control Regime. As a result of this sanction, US-made sensitive high-tech equipment and components were banned from being sold to China, and Chinese space industry was banned from launching US-made commercial satellites.

In July 1997 Pakistan allegedly test-fired an 800 km missile. The Pakistani Government acknowledged that a missile had been tested, but did not identify its range. Indian sources assert the missile was a Chinese M-9. American analysts, however, have concluded that the missile is an improved M-11. However, very little information is available on this alleged launch and also its subsequent failures, and considerable confusion extends to the Pakistani nomeclature for these procured missiles, mainly employed to hoodwink its domestic and international audience.

The Shaheen-II was test-fired on March 9, 2004. The Pakistani military issued a statement saying, "Pakistan today successfully carried out the maiden test fire of the Shaheen 2 surface-to-surface ballistic missile."

The Shaheen-II is evidently a Pakistani version of the Chinese M-18 [DF-15], which was originally shown at the 1987 Beijing air show as a two-stage missile with 1,000 kms range carrying a 400-500 kilogram payload. This M-18 missile had the longest range of any of the current M-series missiles.

The Shaheen series of missiles are imported from China by the Pakistan Atomic Energy Commission National Development Complex. The Shaheen, which was tested with considerable publicity on 15 April 1999, is evidently the Chinese M-11 which Pakistan purchased in the early 1990s. The Shaheen-II would appear to represent the Chinese M-18.

The Shaheen-2 is totally different from the DF-11 type missile as it has a diameter is 1.40 m. China Hexi Chemical & Mechanical Company manufactures the solid motors for the first stage (SpaB-140B)  and for the second stage the shorter solid motor SpaB-140 is used.

It should be also noted that the Ghauri [Hatf-5] is a clear derivative of North Korea's Nodong and the Ghauri-III [Abdali] of Taepodong-1 sourced in exchange for Pakistan's sensitive and exclusive nuclear technology which was in turn bought from China.

Gen. Khalid Kidwai an adviser to Pakistan’s National Command Authority, at the Carnegie Nuclear Policy Conference postured that Pakistan has a “full-spectrum” nuclear capability and is also developing a second-strike capacity to deter India. The delivery system would be the Shaheen III, a missile that can reach the entire landmass of India with a purported range of 2,750 km range which would even cover the Andaman & Nicobar island bases of India.

This buffoon went on to chirp further “India should look at Pakistan’s complete inventory and think through. So I hope sanity prevails,” the general said. Now that Pakistan has “foreclosed the war option,” it was time to make “permanent peace,” he offered.

What a Joke! Was this guy joking or was he really serious? Is he expecting India to come down to its knees and beg for Pakistani mercy? Kidwai, are you living in a fools paradise? Do you think that Indian defence think tank would be foolish enough to believe your bluster?

Take a look at all the officials witnessing the launch, they don't seem to be cheerful at the proceedings at all, knowing well what they are seeing is the launch of a Chinese Missile in shiny Pakistani garb!
Though the claim is unverifiable and subject to suspicion given Islamabad's constant belligerent overtures used to often taunt India, but at least they seem to have something on paper. However, what he failed to specify among the crowd is the origin of this rocket system, he clearly bamboozled the world (seemingly) to state that it was an entirely Pakistani effort. Bullocks! The only missiles developed locally was the  Hatf-1, Hatf-2 by SUPARCO but was cancelled as they were unreliable. All the other missiles in Pakistans armory are just bought out off-the-shelf systems.

The Shaheen III is a spruced-up version of the Shaheen II. Since the missile is sold fueled it does not require complex hardware adjustments to modify the fuel tanks to improve range cover. Interestingly similar techniques have been adopted by other countries desperate to attain ballistic missile range capability such as Iran and North Korea, they have tinkered extensively to re-engineer the infamous Soviet era SCUD missile systems. 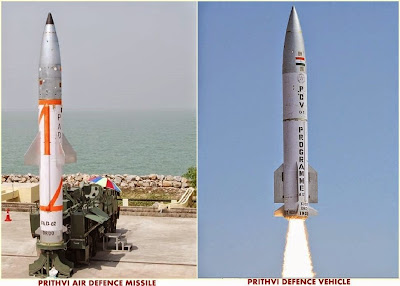 It is simple! India is developing an indigenous Advanced Air Defence System, a double-tiered security layer consisting of two interceptor missiles, namely the Prithvi Air Defence (PAD) for high altitude interception (exo-atmospheric), and the Advanced Air Defence (AAD) for lower altitude interception (endo-atmospheric). The two-tiered shield will be able to intercept any incoming missile launched 5,000 Km away, the missiles will work in tandem to ensure a hit probability of 99.8 percent. Several tests have successfully demonstrated a special feature of intercepting multiple targets with multiple interceptors which involved the use of 3D Multi-Function Control Radar (MFCR) developed by DRDO's Electronics & Radar Devlopment Establishment (LRDE) division.

In a significant milestone, DRDO 27th April 2014 successfully carried out its maiden PDV mission meeting the mission objectives. On 23 November 2012, AAD was successfully test-fired. In this mission, the complex feature of intercepting multiple targets with multiple interceptor was demonstrated successfully.

Advanced Air Defence (AAD) missile being launched during Electronic Target Trials
DRDO has also developed a new Prithvi interceptor missile codenamed Prithvi Defence Vehicle (PDV). It is a two-stage missile and both the stages are powered by solid motors. It has an complex algorithm to control the vehicle at an altitude of more than 150 km. The PDV will eventually replace the existing PAD in the PAD/AAD configuration. It has an Infinite Impulse Response (IIR) seeker for its kill vehicle. IIR is a sophisticated and exclusive technology which will be used to distinguish target recognition between actual warheads and decoys, released by the enemy vehicle in order to create false targets. The PDV will complete the Phase 1 of the BMD system, Phase 2 development will take over for protection against missiles with a range of 5,000 km or beyond.

The Chinese origin missiles in Pakistan's armory are of vintage lineage, the basic foundational development of these missile by China started in the 1980s and matured in the early 1990s. The Chinese had terminated most of the old DongFeng missile series before handing it over to the Pakistanis. The guidance system and the terminal phase homing technologies are rather crude and grossly outdated. The missiles are sluggish and would prove to be easy pickings for both the PDV & AAD. However, if the Chinese go on to gift Pakistan Multiple Independent Targetable Re-entry Vehicle (MIRV) technology, then it is a different ball-game altogether.

In the India-Pakistan context, the nuclear blackmail edge, which the latter advocates  has since been eroded as India made the move to cleverly build a strategically credible redundant terminal defense system to provide effective protection for multiple target probabilities, however the risks still persists. As far as China-India strategic equation is concerned, an all out conventional war is predicted as a convention however, a resultant nuclear conflagration as a hypothesis cannot be entirely ruled out.

Significantly it means that with the maturity of India's Ballistic Missile Defence shield, India has now all the constituents in place for an anti-satellite kill prospect! But that is a different story which would warrant another piece.