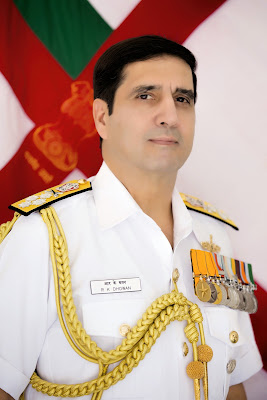 The Chief of Naval Staff, Admiral RK Dhowan PVSM AVSM YSM ADC, presided over the debrief of the recently concluded annual Theatre Level Readiness and Operational Exercise (TROPEX) at Kochi on 11 March. Commanders’-in-chief of all the three naval Commands along with a number of senior operational commanders attended and participated in the discussions held at the Naval Base, Kochi. In addition the naval brass discussed the future roadmap of operations for the Navy which included refining existing concepts of operations catering for the improved maritime capabilities with new acquisitions and infrastructure.

The recently concluded maritime exercise TROPEX 2015, was unique in scale and size with the participation of two aircraft carriers and integration of various new platforms including Mig 29K, P8-I Long Range Maritime Reconnaissance Aircraft, the nuclear submarine Chakra, indigenous stealth destroyer Kolkata and anti-submarine warfare frigate Kamorta besides the participation of 50 ships, submarines and more than 70 aircraft from all the three Commands as also assets of IAF and ICG. All the participating units were completely networked and the operations were facilitated by the robust and seamless communications network, including satellite communications under the navy’s overall thrust on Network Centric Operations, aligned with the prime minister’s vision of ‘Digital India’. Overall, the exercise reiterated the Navy’s readiness and capability to meet various mandated roles, in support of national objectives.

The hon’ble Raksha Mantri, Shri Manohar Parrikar had also spent a day on board INS Vikramaditya during the exercise (mid Feb 15) and witnessed the operational prowess of the newly acquired assets.

The Admiral would also be interacting with officers and men of the Command during his stay at Kochi.
Posted by Nayeem Sheikh at 01:45