All About Astra Beyond Visual Range Missile

Astra is DRDO's home conceived Missile program. Astra is a Beyond Visual Range Air to Air missile to which can at ease shoot down hostile air craft. Astra incorporates latest technologies which is comparable to most of the advanced western and Russian BVR missiles. Fighters equipped with BVR missiles can shoot long range hostile air borne objects. The engagement range of the missile varies between 50 to 100 kilometers, but this range drastically reaches  about 80 kilometers in higher altitudes. Astra uses an active radar seeker to guide the missile to the designated target. Missile is powered by an improved smokeless rocket engine which is fuelled by solid propellants.

DRDO started working an effective Air to Air missile for the IAF since 2000’s after making huge ground breaking work in technology and huge efforts in the designing stage. By 2003 DRDO successfully launched a missile from a ground based testing facility. With the first launch DRDO tested the missile for the aerodynamic capabilities and missile design performance the missile was tested without a warhead and target seekers. The missile program was started from the scratch which meant DRDO could design a new generation missile system which would be ahead of other missile programs.

After series of tests, DRDO again test fired the missile equipped with ‘Seeker and guidance system’. Astra at this stage of was equipped with an Russian developed target seeker system. Satisfied with the seeker guidance and control systems DRDO started integrating the Astra missile system with an aircraft which paved the way for a dream turning to reality. During the first integrated ground based launch DRDO evaluated dual mode guidance system which meant the missile was first fired from an test range and would then acquire and lock on the designated target.

IAF allotted two of its advanced Su 30 MKI Air superiority fighters for the crucial Astra program under which DRDO and HAL would carry out the initial data link establishment in the aircraft and the main missile control system. It was in November 2009 that an IAF Su 30 MKI flew over the Pune Airspace and checking the missiles captive trials. Captive trial does not involve firing the missile itself rather it checks capabilities of the missile integrated in pylons of the aircraft when the aircraft maneuvers around brining tremendous pressure on the pylons and the missile itself. Sukhoi carried out four sorties integrated with Astra and demonstrated several crucial flight performances. It is claimed Sukhoi maneuvered at 7G and continued its flight for more than an hour and soon achieved supersonic speeds. After the tests DRDO team tested the missiles parameters and were satisfied with the results. Captive or Aero mechanical integrity tests allows verification of aspects such as the mechanical, structural and electrical compatibility between the missile and the aircraft, and to test the levels of vibrations, strain, stress, etc experienced by the missile systems during an flight.

After the captive tests DRDO went ahead with plans to test the missile system under extreme weather conditions. DRDO ascertained the missile could be fired under any condition. DRDO geared up for yet another series of night trails during July 2010. Within an Year DRDO again tested the missile from a ground based launcher to make sure the program was matured enough to be in fact fired from an aircraft. By May 2010 DRDO yet again successfully fired the missile testing it under inclement weather conditions.

With the DRDO and HAL team completing the modification and integration of the missile system with the aircraft by the end of 2012, DRDO launched another battery of tests under which a Astra missile was launched from an ground based launch pad and the missile successfully intercepted a transonic maneuvering pilot less aircraft. Even under the interference from PTA's electronic countermeasure the Astra hit the target and the proximity fuse controlled High explosive destroyed the PTA completely. Notably during the test the missile achieved a max speed of Mach 3.5.

After years of development and testing on 4th May 2014, the missile was successfully test fired from an IAF Su 30 MKI. DRDO confirmed the success of the launch and termed the launch as a ‘textbook launch’ and also clarified the test met all pre-planned mission objectives. The launch was also captured by high speed cameras fitted in the Sukhoi pylon for analysis of the missiles performance.  But here during the test Astra did not intercept any stimulated target.

On 18th March 2015 an Astra missile was fired from an Su 30 MKI and intercepted a electronic stimulated target, a electronic stimulated target is something a flying object which is dropped by another aircraft for target practice, during the tests the missile experienced forces greater than 27G and exhibited hard man oeuvres during a dived down intercept, the missile intercepted the target at an altitude of 6000 feet. A DRDO press release regarding the launch is still awaited.'

The main objective of the test was to intercept and destroy a maneuvering pilot less target aircraft. On 19th March 2014 an Su 30 MKI under the service of Indian air force which was armed with a Astra missile scrambled to intercept an PTA off the Odisha coast. Locating the target the missile was fired from the aircraft. The target was successfully engaged and it was captured by Telemetry and Electro-optical tracking stations. In place of warhead it's carry’s the telemetry equipment’s.

There are several plans to indigenous the missile completely by replacing Russian R 77 radar seeker into Indian made one. And the improved Mark II version with an increased range is also under planning. Su 30, MiG 29, Mirage 2000, Jaguar and Tejas are to be armed with Astra which can prove to be a force multiplier. 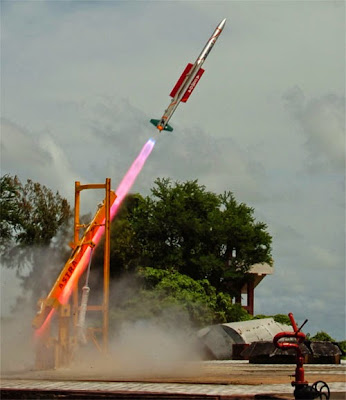 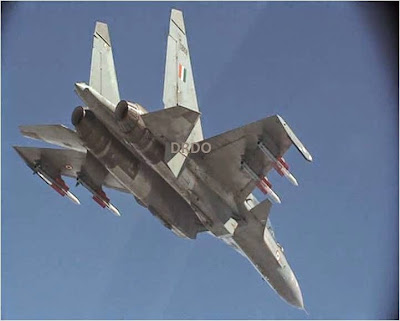 Mock Astra missiles in the Su 30 MKI for Captive Trails. 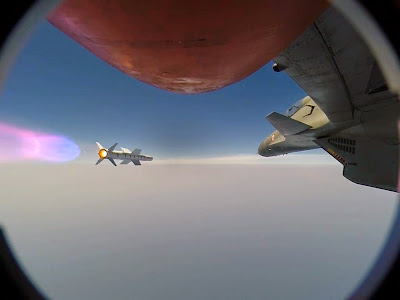 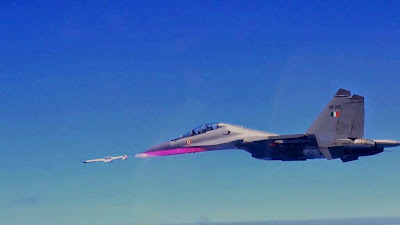 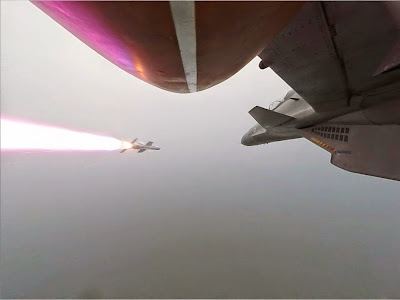 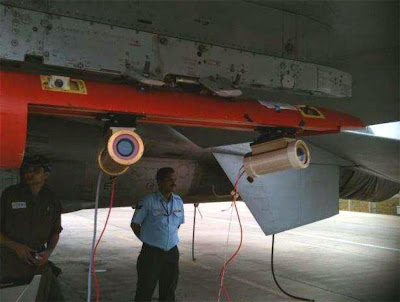 Camera's in the Su 30 MKI to capture the Missile's performance