MKIED SU 35 IN TALKS BETWEEN RUSSIA AND INDIA 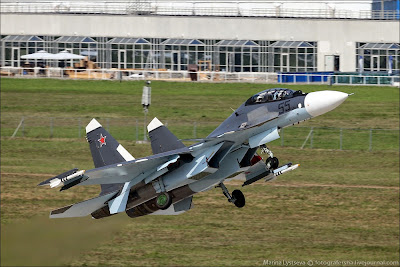 The Russian Su 35 S without the Wingtip Jammer

With the depleting number of fighter squadrons in the IAF the Indian government called out the MRCA tender worth initially about 82000 crore. Under the deal the winning bidder was to supply 126 multi-role combat aircraft to the Indian Air Force (IAF). The deal featured six battle proven and highly maneuverable fighter aircraft. The Boeing featured its  F/A-18E/F Super Hornet, the French fielded the Dassault Rafale, Euro fighter Typhoon, the Us backed Lockheed Martin F-16 Fighting Falcon, the Russian’s fielded the advanced  Mikoyan MiG-35, and Saab JAS 39 Gripen. After an intensive and detailed technical evaluation by the IAF the bidders were reduced to Dassault Rafale and the Euro fighter Typhoon. By January 2012 Rafale was declared the winner of the MMRCA competition, beating Eurofighter Typhoon on cost. Rafale agreed for a full ToT to Indian based HAL, which would be manufacturing 108 of the Rafale under licence. But after Rafale was selected numerous numbers of flaws were being reported by the opposite’s sides. The deal never made headway and always remained in turbulent waters. Dassault and the Indian counterpart have had disputes with the licence and the warranty issues. The deal as to date is yet to be signed and it is widely reported the Indian government is looking for replacements with the SU 30 MKI making headway in the process.

India has enjoyed a longstanding and wide-ranging cooperation with Russia in the field of defense. India-Russia military technical cooperation has evolved from a simple buyer - seller framework to one involving joint research, development and production of advanced defense technologies and systems. With the MRCA deal signed with the French based Dassualt heading towards a deadlock the Indian government is interested towards the Russian products which include the SU 30 and the SU 35. But the major clause for the MRCA deal was to bridge the gap between the LCA and the Multi-Role SU 30 aircraft. In the recently held IDEX at UAE, Rostec CEO Sergey Chemezov was quoted saying “We have been negotiating and have signed the intention protocol for the Su-35," said during the IDEX show in Abu Dhabi last month. "Now we are working on designing ideas for this contract and on creating a manufacturing platform for the aircraft of the fifth generation “. The company with this has confirmed initial talks and has also confirmed the inking of the intention protocol. The deal includes supplying the IAF with Ground attack version of Su 35. Rostec claims the Su-35S would be a fifth generation fighter, as opposed to the legacy fourth generation Su-35. That implies stealth, but it is still unclear whether the jet would be on par with an F-35 joint strike fighter. The Su-35S is a more improved and modified ‘ground attack’ units. But the Indian government is yet to confirm any of the news related to SU35. If the deal is indeed signed and the IAF opts for a better modified and stealth capable SU-35S it raises an array of question.

The future of MRCA deal?

The proposed modernization plans for the Sukhoi’s ?

With the SU-35S inducted, the path of India’s very own stealth aircraft under AMCA project ?


The Su-35S is a aircraft that has no proven track record. The aircraft is yet to see any battle. And with stealth being integrated the aircraft may turn out be an heavy aircraft which effectively place it in another field. But Rafale is an aircraft that has proven battlefield capabilities. It’s optimized to fly in extremely low level altitudes evading enemy Air defence and can provide effective close Air support. The Rafale is currently being involved in operations against in Iraq. With the incidents involving the shoot down of the Jordanian F 16 the collation forces have restricted the minimum flight altitude 6000 ft which would effectively evade the MANPAD Threat. Charged with an ‘Close Air support’ over Peshmerga the Rafale’s did a remarkable ground Run and killing scores of some ISIS members. The Rafale had remarkably used it’s Gatling cannon. The A10 gunships had failed in the same mission after being struck with MANPADS. 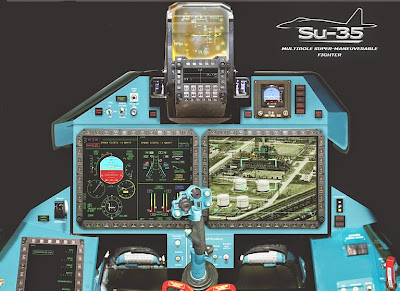 The Rafales can carry six 500lb PGM/LGB with three 2000lts Drop tank and a Targeting Pod, along with 6 other A2A missiles, which is truly an outstanding configuration which cannot be seen on other aircraft. The Su 35S can carry an array of Unguided Dumb Bombs which may vary according to the modification India would demand. The SU-35S is rumored to house around 32 Unguided Dumb ammunition of 250 lbs. The F-16 is also rumored to house around 16 250lbs of Guided small diameter bombs. The Su 35 is fitted out with Four PGM each of 1000lbs. This would prove decisive in a guided ground air support. The F 15 E with SDB or Su 35 with FAB 250 or KAB 1000 can carry two A2A missiles. If intercepted by enemy aircraft the chances of survivability is extremely low. 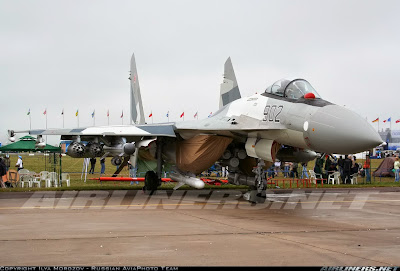 Bunch of Armour in Su 35 Static display only

The Rafale comes with five wet points which effectively sums to five drop tanks unlike the Rafale, the Flanker series are designed with no wet points. The aircraft relays only on the Internal fuel tanks but the Modified Su 35 S comes with three wet Points which would enhance the combat range to a great extent. The Rafale uses the Spectra EW system. The Su 35 is armed with wingtip jammers in the form of SAP 350 or SAP 518.

The Su 35 S is an Fifth Generation aircraft with Stealth capability. With China already pacing orders for Su 35 and deliveries to being shortly, the deal is being given great importance. Since SU-35S is an under development various requirements of IAF can be taken care in a effective manner.
Posted by Nayeem Sheikh at 23:48