The Legend Of Liao Ning 16 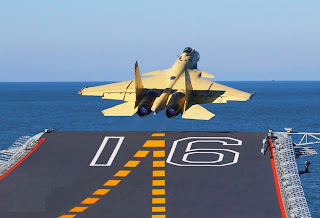 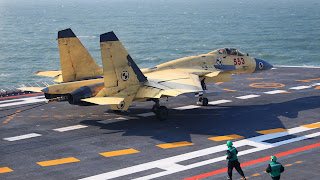 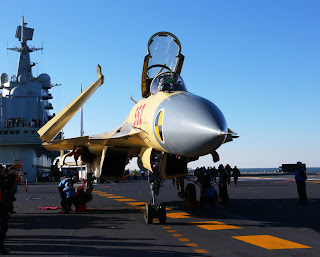 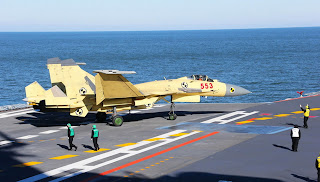 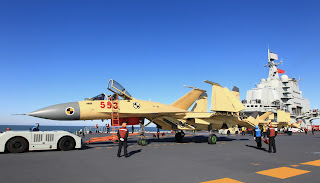 Within just two months of being commissioned, the Liao Ning (pennant no 16)—the   PLA Navy’s (PLAN) first aircraft carrier—on November 25 both received and launched its first two Shenyang Aircraft Corp-built J-15 combat aircraft (clones of the Su-33). It was on September 25, 2012 that China had commissioned the Liao Ning, which will primarily be used for testing purposes but it will also help defend “the interests of state sovereignty, security and development,” according to the country’s Ministry of National Defense. China’s then President Hu Jintao and Premier Wen Jiabao had attended the commissioning ceremony, thereby highlighting the political importance attached to the 990-feet Soviet-era vessel. 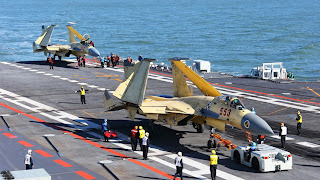 
Second stage: Fine-Tuning. The period of being sent back to the shipyard after delivery, which normally lasts for several months, is a typical maintenance stage in the early phase of the whole life-cycle, aiming to amend the problems in the final tests and troubles found and postponed to be solved during trial voyages, and also to upgrade the various on-board carrier-based systems. The shipyard bearing the task after being sent back is similar to the shipyard of goods and materials and equipment because it is familiar with the aircraft carrier.

Third stage: Combat Deployment Preparation. The training for preparedness during war is the responsibility of the fleet forces command where the aircraft carrier is in, including the tests of air-defence operation system, anti-submarine warfare system, anti-ship combat system, electronic warfare system, and flying of carrier-based aircraft groups, as well as certification of the crew complement and their operational capacities. During the training period, the crew complement must accept comprehensive training to adapt to the aviation facilities of the aircraft carrier, such as the battle station exercises for dragging, rescuing and refueling, and battle station operational exercises on duty. The training and examination of operating personnel on takeoff and landing of the carrier-based aircraft are also essential. Before the new aircraft carrier enters formal service, the specialised technician personnel must conduct a comprehensive flight-deck inspection, including the distributed architecture, rigidity, strength and conditions of taking off and landing. 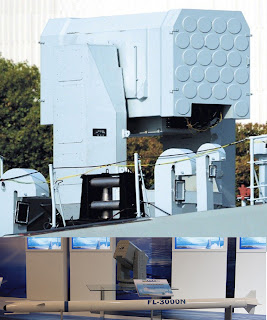 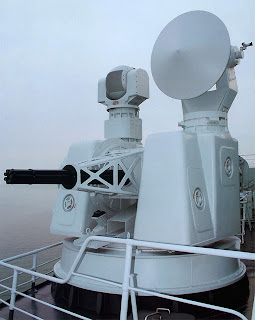 The Liao Ning had its weapons suite installed by April 2011. The suite includes four FL-3000N anti-missile systems each comprising a 24-missile launcher. The two metre-long FL-3000N missiles have a maximum range of 9km. Also installed for close-in air defence are twin nine-barrel variants of the Type 1130 cannon system, plus twin 18-tube countermeasures dispensers. For ASW defence, twin UDAV-1M 254mm RBU-12000 ten-tube ASW mortar launchers have been installed. Built by Russia’s ‘SPLAV’ Federal State Unitary Enterprise State Research & Production Association, the KT-153M launcher can fire two types of rounds: a decoy round (111S02) and an ASW rocket round (111CZG). The former is designed for the hydro-acoustic decoying, ensuring that an inbound active-homing torpedo is diverted. The latter is used both in a barrage mode to lay on an inbound torpedo’s trajectory a drifting mine barrage comprised of several warheads and in a depth-charge bomb mode. 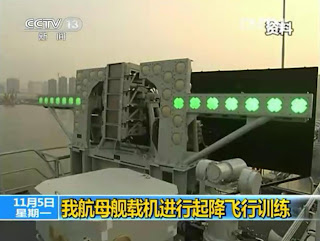 Also on board is a locally developed Improved Fresnel Lens Optical Landing System (IFLOLS), which is used to give glidepath information to pilots in the terminal phase of landing on an aircraft carrier. IFLOLS, uses a fibre-optic ‘source’ light, projected through lenses to present a sharper, crisper light. This has enabled pilots to begin to fly ‘the ball’ further away from the ship, thereby making the transition from instrument flight to visual flight smoother. Additional improvements include better deck motion compensation due to internalisation of the mechanism. The Liao Ning on August 10, 2011 left its shipyard at Dalian Port in northeast China’s Liaoning Province after an eight-year refitting process. As it set sail, the Liaoning Provincial Maritime Safety Administration publicised a notice restricting navigation in waters off the Dalian coast, saying that vessels are forbidden from travelling through an area of sea 13--25 nautical miles wide and 22 nautical miles long in the northern Yellow Sea and Liaodong Bay from August 10 to 14, 2011. 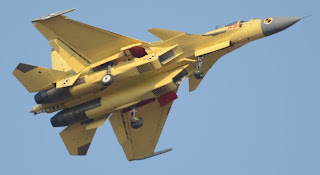 The 323 metre-long Liao Ning will carry about 18 J-15 ‘flying shark’ heavy multi-role combat aircraft (a cloned version of the Su-33), about six Z-8K airborne early warning helicopters, and two Z-8K search-and-rescue helicopters. The vessel will also carry 2,500 tonnes of aviation fuel, allowing it to generate up to 1,000 aircraft and helicopter sorties without any replenishment. Crew complement will be 3,000. The J-15, developed and produced by the No112 Factory of Shenyang Aircraft Corp (SAC), features enlarged folding wings, strengthened landing gears with twin nose wheels, a pair of small canard foreplanes, a larger wing area to improve its low-speed handling, a shortened tail-cone to avoid tail-strike during high AoA landing, and an arrester hook. The avionics and weapons suites are both of Chinese origin. At least one Su-33 prototype (T-10K-3) was acquired from Ukraine in 2001 for airframe reverse-engineering purposes. The first J-15 prototype was assembled by SAC in 2008 and it made its maiden flight on August 31, 2009, when it was powered by two Russian AL-31F turbofan engines. The first takeoff from a land-based simulated ski-jump occurred on May 6, 2010. For lead-in-fighter training for the PLAN’s aircraft carrier-based naval aviators, the FL-2000/JL-9 flying training aircraft has been modified to incorporate an arrester hook. 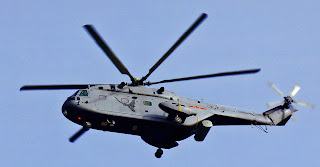 The Liao Ning, formerly known as the Varyag, was to be an Admiral Kuznetsov-class multi-role aircraft carrier of the Soviet Union. She was known as Riga when her keel was laid down at Shipyard 444 (now Nikolayev South) in Nikolayev December 6, 1985. Design of the carrier was undertaken by the Nevskoye Planning and Design Bureau. She was launched December 4, 1988, but she was renamed Varyag in late 1990. Construction stopped by 1992, with the ship structurally complete but without electronics. With the dissolution of the Soviet Union, the vessel’s ownership was transferred to Ukraine, where the ship was laid up, unmaintained, then stripped. In early 1998, she lacked engines, a rudder, and much of her operating systems, and was put up for auction. It was purchased at an auction for US$20 million by Chong Lot Travel Agency, a company widely believed to be a front for the PLAN. In April 1998, the then Ukrainian Trade Minister Roman Shpek announced the winning bid—US$20 million from Chong Lot Travel Agency Ltd, a small company based in China’s Hongkong SAR. The company subsequently proposed to tow the Varyag out of the Black Sea, through the Suez Canal and around southern Asia to Macau SAR, where it would moor the ship and convert it into a floating hotel and gambling parlour. It would be similar to the maritime attractions ‘Kiev’ in Tianjin and ‘Minsk’ at the Minsk World in Shenzhen. Considerable evidence suggested that the future of Varyag was linked to the PLAN and its programme to develop an aircraft carrier. Before the auction was closed, officials in Macau had warned Chong Lot that it would not be permitted to berth Varyag in the harbour. The sale was carried out anyway. Chong Lot is owned by Chin Luck (Holdings) Company of Hongkong SAR. Four of Chin Luck’s six board members lived in Yantai, China, where a major PLAN shipyard is located. Chin Luck’s Chairman then was a former career military officer with the PLA. In mid-2000, the Dutch ITC tugboat Suhaili with a Filipino crew was hired to take the Varyag under tow. Chong Lot could not get permission from Turkey to transit the dangerous Bosphorus Strait, since under the Montreux Treaty of 1936 Turkey has obligations to permit free passage, but has certain sovereignty and refusal rights. The Varyag spent 16 months under commercial tow circling in the Black Sea. High-level PRC government officials conducted negotiations in Ankara on Chong Lot’s behalf, offering to allow Chinese tourists to visit cash-strapped Turkey if the travel agency’s ship were allowed to pass through the Straits. On November 1, 2001, Turkey finally relented from its position that the vessel posed too great of a danger to the bridges of Istanbul, and allowed the transit. The Varyag was then escorted by 27 vessels, including 11 tug-boats and three pilot boats, and took six hours to transit the strait (most large ships take an hour-and-a-half). Sixteen pilots and 250 seamen were involved. At 11:45am on November 2, she completed her passage and made for Gallipoli and Çanakkale at 5.8 Knots (10.7kph). She passed through the Dardanelles without incident. On November 3, Varyag was caught in a Force 9 gale and broke adrift while passing the Greek island of Skyros. Sea-rescue workers tried to re-capture the hulk, which was drifting toward the island of Evia. The seven-member crew (three Russians, three Ukrainians and one Filipino) remained on board as six tugboats tried to reestablish their tow. After many failed attempts to re-attach the lines, a Greek Coast Guard rescue helicopter landed on Varyag and picked up four of the seven-an crew complement. One tug managed to make a line fast to the ship later in the day, but high winds severely hampered efforts by two other tugs to secure the ship. On November 6, Aries Lima (reported as both Dutch and Portuguese), a sailor from the tug Haliva Champion, died after a fall while attempting to re-attach the tow lines. On November 7, the hulk was taken back under tow and progress resumed at some 3 Knots. The Suez Canal does not permit passage of ‘dead’ ships—those without their own on-board power source—so the Varyag was towed through the Straits of Gibraltar, around the Cape of Good Hope, and through the Straits of Malacca. The tugs towing the Varyag maintained an average speed of 6 Knots (11kph) over the 15,200-nautical-mile (28,200km) journey, calling for bunkers and supplies at Piraeus, Greece; Las Palmas, Canary Islands; Maputo, Mozambique; and Singapore en route. The Varyag entered Chinese waters on February 20, 2002, and arrived on March 3 at Dalian Shipyard in northeastern China. China continued to assert that Varyag would be a casino. When Macau awarded new casino licences in February 2002, Chong Lot was not among the successful bidders. The Varyag was subsequently tied up at Dalian. The total cost of acquiring the vessel was over $30 million: $25 million to the Ukrainian government for the hull, nearly $500,000 in transit fees, and some $5 million for the towing services. 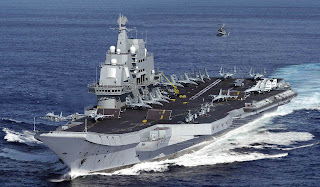 A Zinc Chromate primer was applied to the Varyag’s main deck in 2006 at Dalian. This is a primer for a non-skid surface to keep aircraft from skidding off of a carrier’s main deck. In late Arpil, 2009, the Varyag was moved from the pier in Dalian, to a dry dock about two miles distant. In 2009, at the Wuhan Naval Research Institute 711 or China Ship Design Institute, the PLAN embarked on building a full-scale deck and island mock-up of the Varyag. This included the ski-ramp and complete deck markings, the island superstructure and a complete array of sensors were added there. These fittings have been repeated in real-life on the Liao Ning itself as its island was rebuilt. Two full-size mock-up aircraft were also placed on the mock-up deck, one a Z-8 heavylift helicopter, and a strike aircraft that resembled a Su-33. On June 8, 2011 the Chief of General Staff of the PLA confirmed that China’s first aircraft carrier was under construction. On the morning of August 10, 2011 the Liao Ning began her first sea trial.
Posted by Nayeem Sheikh at 00:11