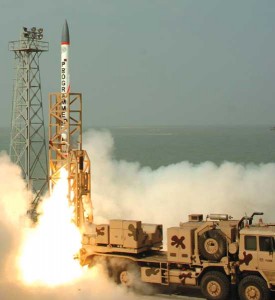 A hectic preparation is underway for Advance Air Defence(AAD) of interceptor missiles involving two ballistic missiles at the Integrated Test Range(ITR), about 15 kms from here next week. ITR sources said, the exercise would be carried out between November 19 and 22 next in the endo- atmospheric region at an altitude of around 15 kms.


This would be the eighth interceptor missile test, including six in the endo-atmospheric, below 20 km of altitude. ITR sources said a modified Prithvi missile would take off from the Integrated Test Range at Chandipur on sea and minutes later the killer supersonic interceptor missile would blast off from the Wheeler Island inside the Bay of Bengal close to Dhamra coast to destroy it. The exercise will be conducted under Ballistic Missile Defence (BMD) programmes being taken up with an objective of protecting India’s major installations from being targeted by hostile neighbors.

Meanwhile, sources said the maiden launch of the sub-sonic cruise missile, christened as ‘Nirbhay’ scheduled to be conducted this month,is likely to be delayed due to modifications brought in the launcher. The missile, in all possibility  is likely to be carried out in January next year, ITR sources said.
Posted by Nayeem Sheikh at 03:17