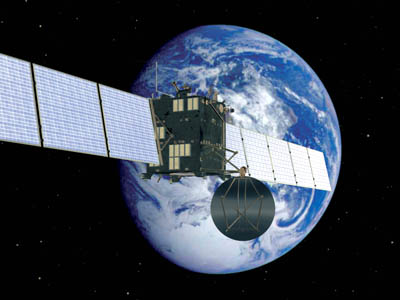 The Indian Space Research Organisation (ISRO) plans to foray into the powerful and high-throughput world of ‘K{-a}’band satellites by importing a six-tonne satellite, building one itself, or both.

It is looking at packing in 100 beams in a ‘next generation’ satellite compared to its regular 40, a senior ISRO associate and satellite expert said. It is testing the market to find a seller who could make it in the next 2 to 3 years as also be a partner in building such an indigenous satellite. It could take ISRO at least five years to work on it from scratch.
ISRO has assembled all its communications and Earth observation satellites in-house for some decades now. “We are trying out a different and twin-pronged approach here,” he said.
ISRO Satellite Centre or ISAC, the satellite assembly centre in Bangalore, earlier this month invited expressions of interest from global satellite manufacturers ‘for design, development, fabrication and operationalisation’ of a 6-tonne K{-a}-band spacecraft. It would weigh almost double the size of the biggest that ISRO has produced so far.
Experts say the K{-a}band will allow higher and faster data transmission on the Internet by at least two or three times what ISRO satellites now offer; and that it will suit VSAT operators who support this traffic.

“K{-a}band is the future, the world is moving towards it and if we don’t get in now, we will be left behind,” the scientist told The Hindu . “We have started building a six-tonne satellite at ISRO facilities, but it will take time.”
In 2010, ISRO sent up GSAT-4 with a K{-a}band transponder. However, its homegrown GSLV launcher failed. The next one, GSAT-11, is at least two years away.
The same year, it also built a K{-a}-band satellite, called HYLAS-1 (or Highly Advanced Satellite) for a fee for British operator Avanti in a tie-up with Europe’s Astrium.
A K{-a}band transponder can accommodate far more users more efficiently than ISRO’s older Ku band satellites, one of them said. However, a disadvantage was ‘rain fade’ or disturbed transmission during rain.

The latest exercise comes at a time when ISRO is desperately augmenting its satellite capacity by leasing foreign satellites partially or fully.