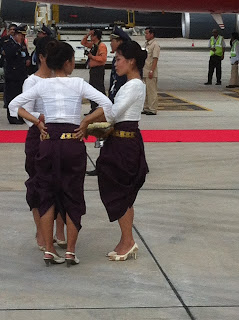 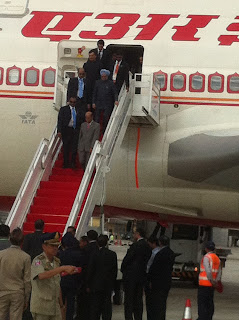 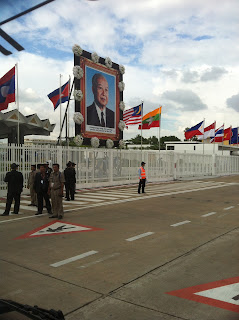 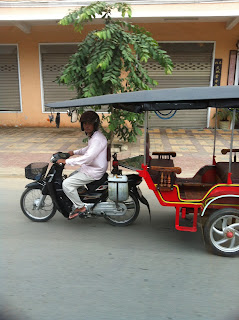 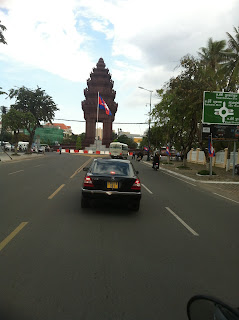 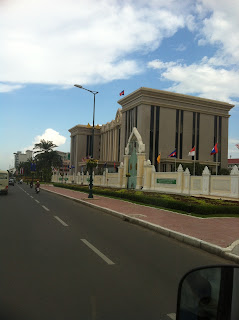 At first glance Phnom Penh reminds me of Imphal, capital of Manipur. The serinity, the clear blue skies, ever smiling people and pristine air, Cambodia has an uncanny resemblance to India's north-east.

And just as well. After all,  north-east is an important element in India's Look East Policy. As I have argued elsewhere, India has to fix north-east before it looks east.

Cambodia, a small but important player in ASEAN comity of nations and in East Asia, is playing host to two successive summits.

On Monday, it will host the 10th India-ASEAN summit and the political more important East Asia Summit the next day.

As Air India One touched down at the Phnom Penh airport this afternoon, an Air China Jumbo Jet was already parked in the VIP arrival tarmac.

That, to me sums up India's predicament in South-East and East Asia: China has been a big player here much before India even began casting its eye eastward. New Delhi can only play catch up. And it is playing catch up in a big way. India thinks the right way to engage with South-east and East Asia is through trade and services.

So PM Manmohan Singh has brought with him Commerce Minister Anand Sharma, who also biefed the on-board media on our way into Cambodia.

The Prime Minister also emphasised the importance India attaches to ASEAN, in a statement he made just before departing for Phnom Penh. He said: "Over the past decade, our engagement with ASEAN has become strong, comprehensive and multi-faceted. The Summit in Phnom Penh will give us an opportunity to preview and prepare an ambitious agenda for the Summit next month to take the India-ASEAN relationship to a new level. In this context, my ASEAN colleagues and I will also have the opportunity to review in Phnom Penh the recommendations of the Eminent Persons Group of India and  ASEAN.

The East Asia summit too has its own importance. With US and Russia both attending the summit as observers, Eäst Asia Summit has become an imprtant forum for all major international players to express their views on the ways to ensure security and stability in this volatile region. The on-going disputes in South and East China Seas are sure to figure in the summit meetings and the retreat to which PM Manmohan Singh and all leaders are expected to participate in Tuesday.

In his Statement the PM said: "East Asia Summit is the foremost forum for promoting peace, stability and prosperity in the Asia Pacific region. This year, we are preparing to launch the negotiations for a Regional Comprehensive Economic Partnership among ASEAN and its FTA Partners, including India. This is a giant step towards creation of an economic community in the region. This forum also serves as a useful platform for enhancing cooperation in the region and discussing regional security issues."


On Sunday evening, The Prime Minister is expected to meet Philipinnes delegation but the real business actually begins on Monday.

For India, the time to seize the initiative in ASEAN region is now. That process may just get a big boost here in Phnom Penh over the next 48 hours.