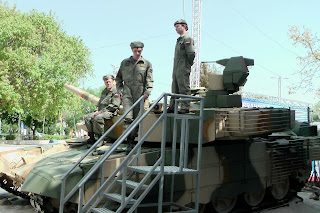 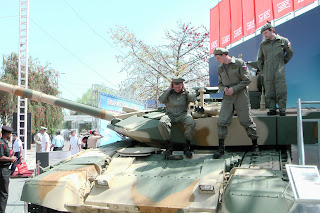 Top army generals are undermining India’s Arjun tank to push through a Rs 10,000 crore order for T-90MS tanks from Russia. Senior defence ministry (MoD) sources tell Business Standard that Arjun trials, proposed for the plains of Punjab, are being scuttled to prevent any high-profile Arjun success from jeopardising the import of more T-90s from Russia.
A proposal from the tank directorate for Arjun trials in Punjab has been placed on the backburner after instructions from the Military Operations (MO) Directorate. The powerful MO Directorate, more than any other branch of the army, deals directly with the army chief.
At stake here is the Rs 10,000 crore purchase of 354 new T-90MS tanks for six tank regiments for the China border. Business Standard had first reported the raising of these regiments (Sept 17, 2012, “In a first, Indian tank brigades to defend China border”). In the proposal that the government is considering for two tank brigades and a mountain strike corps, the army has put in the cost of 354 T-90MS tanks.
These new tanks will supplement the 1657 Russian T-90S, and 2414 T-72M tanks already deployed on the Pakistan border. So far, there are just 128 Arjun tanks in service, with an order for another 118 in the pipeline.
Contacted for comments, the Indian Army denies that the MO Directorate is blocking any trials.
Even as the Arjun tank --- developed in India by the Defence R&D Organisation (DRDO) --- outperforms the T-90 in comparative trials held by the army, support for Russian tanks inexplicably grows. With the Arjun’s performance established, the army is now arguing that the 60-tonne Arjun is too heavy for the soft soil of Punjab and J&K; it must therefore be confined to the deserts of Rajasthan. That would mean that only 4-6 of the army’s 65 tank regiments can operate the Arjun tank.
The DRDO rebuts this logic, as do the tank units that actually operate the Arjun. “The Arjun’s heavier weight is distributed over a larger area because of its larger tracks. Its “nominal ground pressure” is lower than the Russian tanks. So the Arjun can actually move more easily in Punjab,” says S Sundaresh, the DRDO’s Chief Controller of R&D for armoured vehicles.
This is validated by history, says Lieutenant General (Retired) RM Vohra, who won a Mahavir Chakra in the 1971 war while commanding 4 HORSE, a tank regiment equipped with Centurion tanks. He says the 42-tonne Pakistani Patton M-48 tanks got mired in the soft soil of Asal Uttar, in Punjab, while the 51-tonne Centurion moved around that battlefield easily.
The T-90MS, a new, upgraded version of the T-90S that India bought in 2001, is regarded as well suited for the extreme cold of Ladakh, Sikkim and Arunachal Pradesh, where the two new armoured brigades will operate. The Arjun, in contrast, is designed to withstand the heat of the Indian plains, where the T-90S has repeatedly malfunctioned in high temperatures. The T-90S now being built under license at the Heavy Vehicles Factory, Avadi, near Chennai, have proved less reliable than the Russia-built T-90S that were delivered initially.
“The army is justified in wanting the T-90MS for the China border. But it is wrong in scuttling the induction of the Arjun in Punjab and J&K. The Arjun must be given a fair chance. How can a Russian tank be given preference over an Indian one?” says a senior armoured corps general who is still in service.
The six tank regiments being bought for the China border will be divided between two armoured brigades, one located in Ladakh, and the other one in the north-east. Both sectors have valleys and plateaus in which China could attack with tanks. The new tank formation will safeguard these approaches and also provide a retaliatory capability in case of Chinese attack.
Business Standard, 26th Nov 12