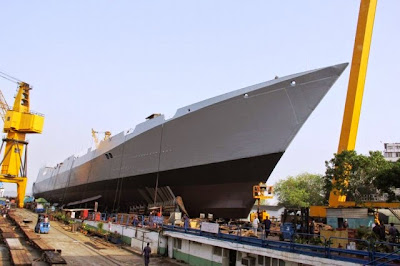 The Hull of P 15 B INS Visakhapatnam Destroyer 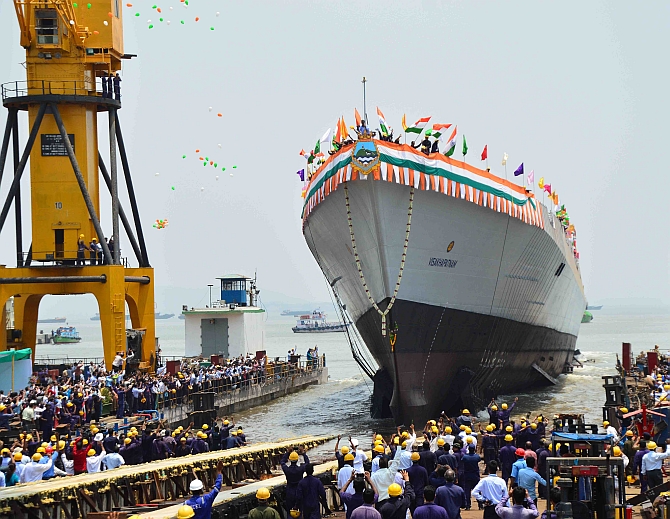 Apart from the US Navy the Japenese become the second Biggest Navy, but the Chinese Sub merged platforms can give upper edge to the JMSDF, but no one can give good credits to Chinese Sub merged platforms, so the Japanese remains second, to fight against Chinese and Dominate the Indian Ocean Indian Navy need more powerful Destroyers, after the Delhi class and Rajput Class, Government plans to build more advanced Network centric Stealth guided Destroyers, hence the P 15 A the Kolkatha class ships born, by this project Navy would receive one Destroyer in each two years, after some delays the Navy getting those destroyers  now,

A Artistic Representation of Advanced Destroyer

The Indian Navy already receive first of the Kolkata Class last year and get inducted and the second Ship Kochi is Expected to inducted in the Navy this year, and the final of P15 A the Chennai would be inducted in the coming Year,

After that Indian Navy has another series more advanced Destroyers compared to the P15 Alpha, The P15 Bravo named Visakhapatnam class and it would be commissioned today, and can finish all trails and be deployed by 2018.

In P15 B there were four ships planned each would be inducted into the navy with two years cap, Starts 2018 and end by 2024, compared to three ships in P 15.

The P 15B Displacement mentioned at 7,300 tons lesser than 200 tons by P 15A, due to the more composite materials sleek design and Less Helicopter Facility, P15 A planned to carry two Helicopters but the P15 B will carry a Single SH 70 ASW, search and Rescue Multi role Helicopter.

The Ships again to carry the More powerful Aegis alternate the Israeli MF STAR Fire Control Radar, which can guide the Ships Offensive and Defensive weapons and gives Target information's, the same MF STAR also the Main FCR in the P 15 A. 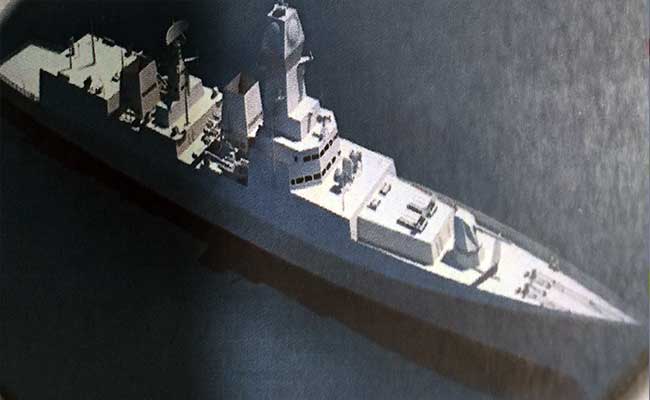 Also the Ship's main gun not yet to be Choose but the Finmccanica OTO Bereda  Naval Gun with Guided Shells may be win the deal, also no information about the RBU 6000 ASW launchers, some roumers also says the Ship can accommodate some Israeli Spike NLOS system for intercepting fast Attack Crafts and Speed Boats, a New method where most western countries are fitting the systems in their Ships. 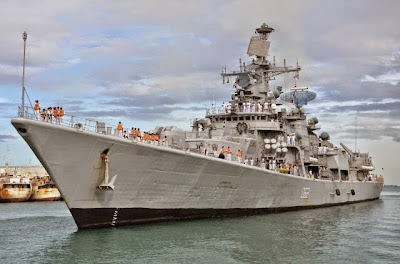 The Ship's Torpedo Launching capability is also unknown, but It's sure two or four Torpedo Launching Tubes would be Placed in the Ships, the same P15 A , Delhi class all equipped to launch four 533mm Torpedo's from the Deck.

The Ships SONAR systems also not described which or what system would be selected the Indigenous Bow Mounted or Navy can import a foreign Bow Mounted SONAR. and no information about the crucial Towed Array SONAR, most of the Indian warships lacks this technology, even the P15 A yet to be receive the Towed Array SONAR. but as per SP's Article the TAS in P15 B comes without any delays, even they don't have the credible sources to prove it,

The Entire Ship built with advanced Network Centric capabilities to fight in the Modern Battle field and can be work with more modern powerful Aircraft carriers, Nuclear Attack submarines and long range ASW planes like the P 8I. 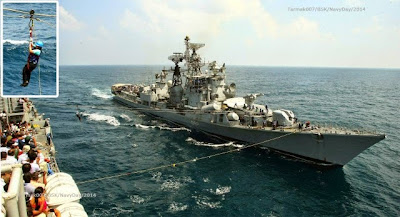 The sources also mentioned that the ship can sustain any kind of Nuclear Biological and Chemical Attacks, even most of the Ships designed to survive such attacks, but noting to say about this, but can these ships can survive when a Large scale EMP attack hit the Ships. Questions Remains. Also some sources said that Navy gets Help from Thales and IAI about the CMS (Combat Management Systems) Network centric Attack and co ordination also setting up the Radars to work even affected by the EMP.

With long Questions yet to be answered which will be out in the Media's in coming Days.
Posted by Nayeem Sheikh at 00:47