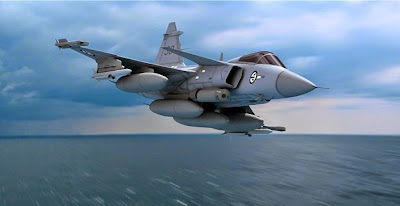 Foreign fighter jet makers see a multi-billion dollar opportunity in India's decision to scale back purchases of high-end aircraft from France, which may free up cash in the world's largest arms importer to buy a new fleet of mid-range planes.

Prime Minister Narendra Modi announced last week that India would buy 36 French Rafale jets for an estimated $4.3 billion, in effect ending talks on a larger deal for 126 planes that would have sucked up some $20 billion and locked rivals out of the market for a generation.

Sweden's Saab and U.S. Lockheed Martin are set to re-pitch their Gripen and F-16 planes, eliminated in the Rafale tender, as the kind of lighter, single-engine aircraft that Defence Minister Manohar Parrikar said on Monday the air force needed to rebuild its fleet.

"We are here and we are ready," said a source close to Saab. Saab was proposing to establish "fully-fledged production" of the Gripen in India alongside a local partner.

Lockheed Martin may also tout its F-16, one of the most widely used fighter planes in the world, as a replacement for Russian-made MiGs that are a mainstay in India's fleet, industry sources said. Lockheed Martin declined to comment.

"The light combat aircraft opportunity is going to be there in the near future because the MiGs have to be replaced really fast," said Delhi-based defence commentator and analyst Neelam Mathews.

Russia, traditionally India's largest arms supplier, is hopeful it can sell more of its Sukhoi Su-30s, a plane partly assembled in India, to tide over the air force while it waits two years to receive the first Rafales. Foreign manufacturers have also welcomed India's decision to negotiate directly with the French government for further Rafales.

"What is positive about the announced Rafale deal is that purchase is supposed to be based on a government-to-government agreement. We have been asking the Indian side for a long time to get back to this practice instead of tenders," said one Russian diplomat.

Moscow wants to speed up the conclusion of talks with India for the joint manufacture of a new generation stealth fighter jet, the diplomat said.

India needs to replenish an air force fleet that has fallen to 34 operational squadrons, down from 39 earlier this decade and below the government-approved strength of 42 considered necessary to face a two-front challenge from Pakistan and China.

Parrikar said on Monday that India needed 100 new light combat aircraft within five years to replace the MiG-21s, and that the heavier and pricier Rafale was not the plane to do it. His preference would be for the indigenously-made Tejas to fill the void. But Parrikar himself has admitted the jet, in development for three decades, has limitations while the latest version still awaits final clearance.

Either way, air force officials and industry sources say India is unlikely to buy anything like the 126 planes agreed in the original deal with France after all-in costs doubled to an estimated $20 billion. Parrikar said he had not decided how many more Rafales he might buy. Manufacturer Dassault Aviation could also pitch its single-engine Mirage if India opts for something cheaper.

Foreign planemakers may need to join forces with an Indian state-run or private partner to win orders, especially if Modi is to realise his goal of developing a military industrial base.

Under the original deal with Dassault, 108 of the jets were to be produced at a state-run Hindustan Aeronautics Limited (HAL) plant. But the two sides could not agree terms.Such disagreements could open up opportunities for nascent private players to partner foreign manufacturers and build locally, experts said.

"This could be Rafale, or any other aircraft as long as the government is able to address the core issues of tech transfer, joint production and design collaboration," said M. Matheswaran, a former Air Marshal and adviser to Hindustan Aeronautics.
Posted by Nayeem Sheikh at 22:57