Most rescue diesel-electric submarine ("BS"). R & D started CDB-112 (later renamed the CDB "Lapis") in 1964-1968 gg in the study of technical solutions rescue submarine. The decision of the USSR on the design and construction adopted September 20, 1967 Design was conducted using the experience of testing and trial operation rescue submarine pr.666 . 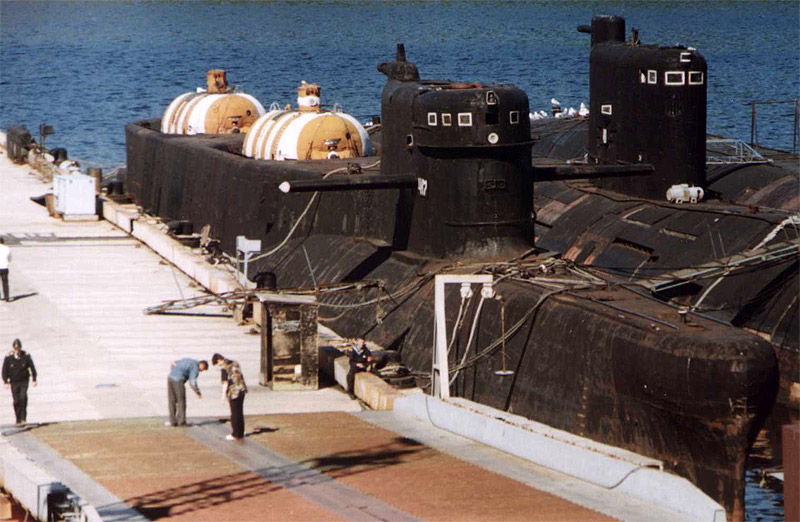 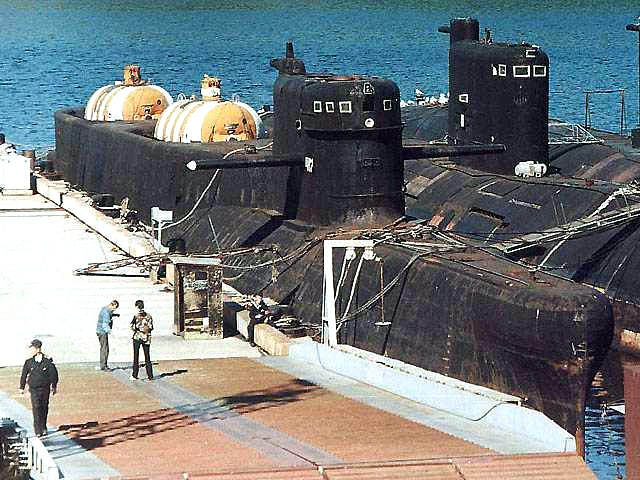 Appointment PL:
- Search alarm submarines at depths up to 240 m on their own and at depths up to 500 meters using two self-propelled submarine rescue wearable shells (PCA) pr.1837.
- Determination of the state of emergency submarine by divers at depths up to 200 m.
- Emergency rescue of the crew of submarines "dry" method using ATP at depths up to 500 m and the "wet" method by divers at depths up to 120 m.
- Search for sunken models of arms and military equipment at depths up to 500 m using PCA.
- Denomination of emergency submarine using special signal cartridges and noise emitters EMERGENCY alarm MGS-29.
- Liaising with the emergency and maintenance of its submarine life.
- Conducting underwater divers by an extended stay at depths up to 300 m.
- Emergency towing the submarine surfaced.
- Conducting amphibious special operations using appropriate flotation devices instead of ATP.
The design of the submarine double-hulled. The upper part of the outer hull of the fence cuttings raised for securing ATP (withstands the storm to 8 points). The front wheels are mounted on horizontal submarine cabin. Bow bulb characteristic of surface vessels placed in it the CEO.
Engines :
2 x 1D43 diesel engine rated at 4000 hp with a system of RDP
1 x 2D42 diesel generator power 1750 hp
2 x main propulsion motors PG141 capacity of 3550 hp
2 x motor of economic progress PG140 capacity of 190 hp
2 x PG103K motor capacity of 50 hp at 165-420 rev / min lag displacement (provide maneuvering near the sunken submarine) - located in the fore and aft ends of the submarine
Mechanics - two shafts with two screws in the annular nozzles.
Energy - lead-acid batteries "article 419", the number of 4 groups of 112 pcs.
Special equipment - on submarines installed special equipment for extended periods of divers at depth - thread-decompression chamber for divers with the gateway, and cut off a long stay divers. Observation equipment is used for saving the "Trident-KP." Work cover long stay divers and rescue provided helium-oxygen compressor GK-225 and GK-3 compressor.

TTX submarine :
The crew - 94 people (including 17 officers, 21 people diving service and 8 people crews PCA) + 50 seats for the crew of the submarine accident
Length - 106 m
Width - 9.7 m
Draft - 6.9 m
Displacement above water with the normal 2 PCA - 3950 tonnes
Displacement underwater with 2 PCA - 5100 tonnes
Buoyancy - 29%
Speed ​​surfaced maximum - 15 kt
Maximum speed underwater - 11.5 kt
Underwater speed the lag - 0.3 kt
Range surface speed (at a rate of 13 kt) - 3000 miles
Submerged speed range (at a rate of 3 kt) - 85 miles
Submerged speed range (at a rate of 11.5 kt) - 18 miles
Immersion depth Working - 240 m
Immersion depth limit - 300 m
Continuous stay under water - 60 hours
Autonomy - 45 days
Armament:
- 2 x self-propelled projectile rescue (ATP) pr.1837
- Since 1980 after upgrading the submarine B-486 (on the B-257 after construction) - ATP pr.1855 "Prize"
- From 1994 to the B-257 - SPS pr.18270 "Bester"
- As well submarines during retrofit upgrades for receiving devices for repairs and pr.1837K pr.1839.
Equipment: (part of the SAS stations and dr.oborudovanie probably mentioned twice under different names, as identification will be fixed)
- Search Engine ASG minoiskaniya MG-519 "Plutonium" - in the course of modernization replaced by GAS "Harp-G" (used to search for the sunken submarine without emergency signaling device, installed in the course of modernization) - replaced by "Harp-M" in the course of modernization
- GAS "Gamma-P" (established in the course of modernization)
- Navigational sonar MG-17
- A system of "Cobalt"
- 2 x ASG locations MGA-5 (located along the ship's keel in part) - to clarify the position of the submarine emergency PL) - in the course of modernization replaced by the CEO of the side and circular scan "Crillon"
- GAS shumopelengatsii MG-10m2 (bearing to provide emergency submarines by emergency alarm signals MGS-29 emergency PL)
- ASG emergency communications MG-15 or MG-25
- The equipment determine the speed of sound in water MG-23
- GAS connection with the PCA - MGA-1
- Radar "Cascade"
- Radar-identification (?) "Chrome-KM" - in the course of modernization changed to "Password-301"
- Finder "Veil"
- Radiation detection radar station (SARS) "Roll forward-M" (replaced by MRP-25 in the course of modernization)
- Communication station STAN-M - is replaced by "Anis-M-B" in the course of modernization
- Periscope
- Determine the start of cavitation equipment screw GI-102
- Navigation echo sounder NEL-6 (replaced during the repair on sounder M1)
- Eholedomer EL-3
- Hydroacoustic log LA-1 (for measuring the speed of the submarine over the ground at a distance to the ground)
- Hydroacoustic log LA-3 "Kem" (for measuring the speed of the submarine over ground when the distance to the ground 5-170 m) - established in the course of modernization
- GAS "Equator-1" - for locating submarines relatively bottom lighthouses.
For communication with the station is used by divers MAR-55. optical visibility from the TV set of the MT-70 (4 pcs) with 5 cameras under the keel and one camera in the cockpit (field of view - 50 m in length and 10 m submarines from the keel and over the boat) - observation is carried out through three screens in the control room . Light TV camera provides deep JMT-64 lamps. Automated system for retaining the depth of immersion with the possibility of changes in increments of 1 to 15 m. There is a pump for the erosion of the soil to a depth of 120 m. There is equipment-electric metal cutting and welding at depths up to 60 m (surfaced submarines) and up to 200 m (in the underwater position). 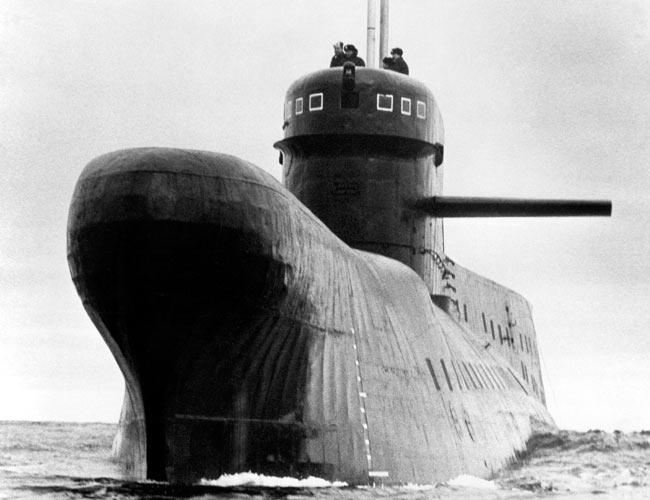 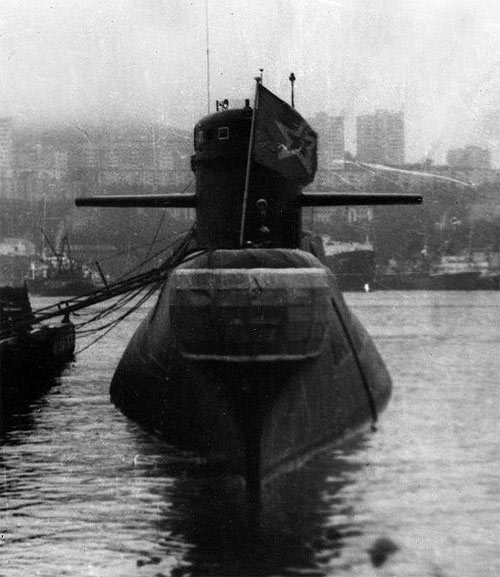 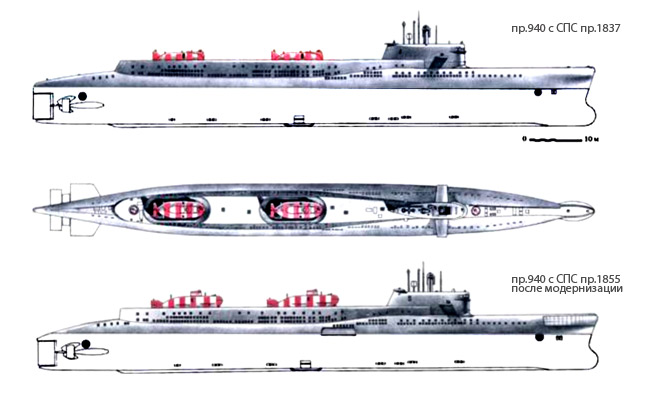 - 1977 October - minesweeper "fuse" together with pr.266M minesweeper "Charge" and submarine rescue BS-486 pr.940 made ​​the transition to Kamchatka to search for the sunken submarine after firing torpedoes new sample. (BS-486 submarine was listed as part of the 19th Brigade of submarines, Vladivostok, bay Ulysses). The torpedo was found trawler almost from the first tack using sonar to search for ground mines. Following the discovery of the torpedo guidance was carried out underwater transport and rescue apparatus on board the submarine BS-486 lying on the ground with the help of a torpedo sonar and sonar communication. Torpedo raised to the surface ( source ). - 1978 - head held two submarines modernization of equipment according to the original project.

- March 1978 - BS-486 participated in Podem helicopter crashed on board the cruiser "Admiral Senyavin."

- 1980 October - Salvage Operation Yak-38. 09.08.1980, in the South China Sea, on completion of aircraft carrier "Minsk" another short take-off at 8 deg. north latitude, 108 degrees. E Deck attack plane crashed Yak-38. By order of command minesweeper "fuse" pr.266M went went to the naval base Cam Ranh, (Vietnam) and took part in an operation to search and lifting crashed aircraft. Search aircraft produced using sonar search of bottom mines. Location of the aircraft was found. In the future, the ship has the task of putting in the submersible submarine BS-486 pr.940 (from the 19 SLBMs). The task of the ship has been successfully completed. The plane with the remains of the pilot was raised, loaded aboard BOD "Petropavlovsk" and sent to the USSR ( source ). - 1981 October 21 - BS-486 took part in the rescue divers from the sunken submarine S-178 (pr.Bosfor East, Pacific Ocean) pr.613 .


- 1980 - Development project for the modernization of submarines for testing MHD propulsor (to be installed in place of one of the PCA).

- 1983 September-November - BS-486 participated in the operation to raise the "black boxes" was shot down over Sakhalin South Korean Boeing 747. 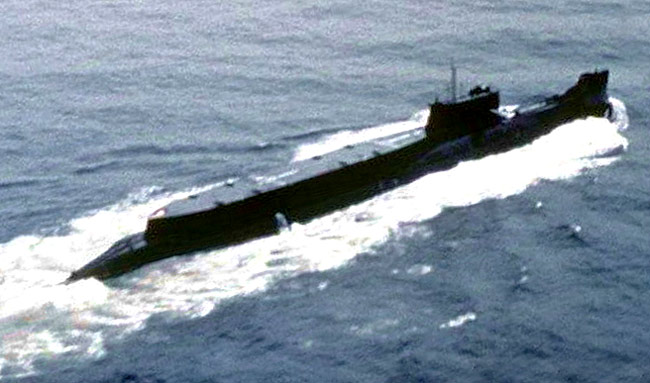 - 1980 2nd half - development of submarine modernization project for the installation of auxiliary nuclear powerplant WOW-6.