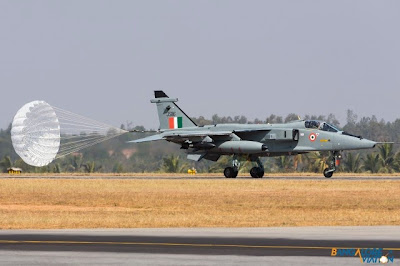 The Jaguar from IAF

Developed for close air support and deep penetration bombing primarily for the French and Britain forces is a very reliable piece of hardware. The jets were originally inducted as trainer jets in 1960. Soon the need was felt for using the jet as a fulltime war machine. The jet was equipped with supersonic capabilities, recon pods and tactical nuclear capabilities. The Indian forces were approached with the design as early as 1968 but India rejected the offer. In 1978, India choose Jaguar rejecting the Dassault fielded Mirage F1 and the Saab Viggen and ordered 40 jets in fly away condition and 120 jets to be built in India under licence by HAL at an estimated $1 billion.

Jaguar is one of the best ground attack platforms. The Jags have had a very reliable operational history and there have not been a single loss of Jag during the operation. Most of the foreign countries already withdrew Jaguar from its front line without getting more advanced platform relying on the underperforming Tornado.

But India acted more brilliantly; India is unknown to run aircrafts well above their shell life with regular mid life up gradation programs. The Jaguar has already completed two MLU, and is now heading for their third MLU. The Darin (Display Attack Ranging Inertial Navigation) is going to be one of the notable features to be clubbed to the existing avionics jaguar package, Jag currently lacks a reliable Radar system instead uses the IRST (Infrared Search and Track ) and state of the art OLS(Optical Locator Systems). India is currently equipped with three different variants, the maritime version charged with the surveillance of the coast and the Deep Penetration bomber currently in use with the Air force and the one under Strategic Forces Command for tactical nuclear strikes.

The air force version is equipped with ground attack munitions, Martel ARM along with R 550 Magic Air to Air Missiles and two on board cannons.  Primarily used for deep penetration, SEAD DEAD and Close Air support one of the best platforms in Indian Air force with good Combat Radius. In lo lo lo profile mission with two Martel ARM missiles it can strike targets beyond 1000 km. 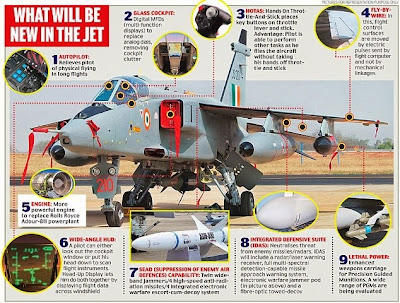 The Jaguar also comes with Israeli Litening pods for better recon and pin point ground attack missions with using of LGB/PGM. The DARIN III comes with IADS suites which allow the Jaguar escape from any kind of Airborne and Ground threats.

The Maritime version comes with Radar named Agave which can fire Sea Eagle Anti Ship missile, a primary maritime strike aircraft for IAF. This can be upgraded into DARIN III Standard with newer Israeli ELTA Radar, which is capable to fire the new Generation Harpoon Anti Shipping Missiles from Jaguar IM Aircraft. HAL has already completed the DARIN III Upgrade of Jaguars and IAF has accepted its performance and IAF will soon receive the upgraded Jaguar from HAL.

The SFC Jaguars comes with nuclear strike Missions. Currently IAF have only one certified Aircraft which can carry nuclear bombs. More than 20+ Aircraft's are under SFC control and are capable of carrying out nuclear Gravity bombs.

The first flight of the Jagaur D3 took place in 2012, IAF was not satisfied with the mission computers and engines.  Rolls Royce or Honeywell Engine will be selected later and would power the aircraft with improved capabilities. HAL carried out successful first flight of Jaguar air force strike version in March 2015. The primary mission stat reports are awaited. 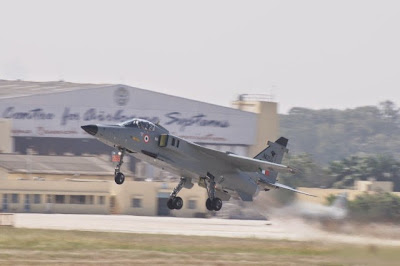