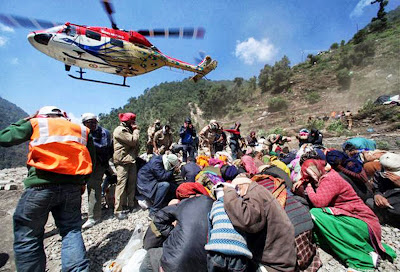 HAL Statement: HAL-produced helicopters – Dhruv, Cheetah/Chetak – played a leading role in the biggest ever helicopter based rescue operation of Indian defence forces in flood and rain-hit areas of Uttarakhand recently. These copters deployed over flood and landslide affected areas in Uttarakhand performed effectively in dropping paratroopers, evacuating stranded people and in supply of food and medicines. The helicopters made hundreds of sorties in the high risk zone overcoming strong winds, visibility and with virtually no space for landing on high terrains. HAL teams were positioned at Deharadun and Delhi to ensure logistic support for the rescue operations.

Dhruv which can carry 16 passengers was the star performer. On many occasions, due to incessant rain IAF pilots could only use Dhruv as it was unsafe for other copters to land.  Dhruv helicopters flew for nearly 630 hours during the operation and Cheetah/Chetak flew 520 hours.

"The indigenous helicopters pressed into service by the Army and the Air Force in flood-hit areas have proved their mettle in carrying out rescue and relief operations in highly inaccessible areas.  We are proud of it", says Dr. R.K. Tyagi, Chairman, HAL.

HAL designed,  developed and produced  Dhruv helicopters have been  delivered to the Indian Army, Air Force, Navy and the Coast Guard. They are also exported. The civil version of Dhruv has been certified by the DGCA and delivered to ONGC, Govt of Jharkand and the BSF.

Based on the expertise of Dhruv, HAL undertook the Design & Development of Light Combat Helicopter (LCH) and Light Utility Helicopter (LUH).
Posted by Nayeem Sheikh at 00:36