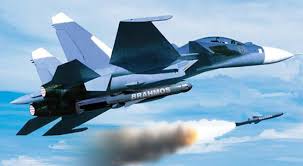 The BrahMos Aerospace plans to make the first test-launch of a BrahMos missile from the Indian fighter Su-30MKI in 2014, BrahMos Aerospace Executive Director from Russia Alexander Maksichev told reporters on Sunday.
“The works to create an air-to-ground BrahMos missile are under way. On the one hand, the upgrading of the fighter Su-30MKI for the missile continues, these works are on in India.
Meanwhile, the adaptation of the missile to the warplane is nearing completion. We hope that first flight tests will begin this year, still probably with a prototype of the missile. In 2014 we plan to make a first test launch of a real missile from the warplane,” the Russian director of the company said.
Posted by Nayeem Sheikh at 21:43