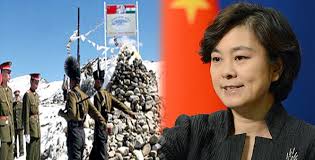 Virtually defending the latest incursion by the PLA in the Chumar sector in Ladakh, China today said its troops were patrolling on its side of the Line of Actual Control (LAC) and asserted that “status quo” should not be changed pending a final settlement.
“I have seen the relevant reports but I am not aware of the specific situation,” Chinese Foreign Ministry spokesperson Hua Chunying told a media briefing when asked about the incident that took place ahead of Defence Minister A K Antony’s visit here last week.
“Chinese Defence forces have been patrolling along the Chinese side of the LAC of the China-India border,” she said.
“The general situation in the border areas is stable. We have the consensus that pending the final settlement of the boundary question no one of us (none from India or China) should change the status quo along the LAC,” she said, indirectly asserting that neither side should resort to any infrastructure development.
“China would like to make joint efforts with the Indian side to safeguard peace and tranquility of the border areas,” Hua said.
The incident took place on June 17 when the People’s Liberation Army (PLA) troops intruded into the Chumar sector in Ladakh and smashed some bunkers besides cutting wires of cameras installed at the Indian border post.
The camera which was removed was reportedly returned on July 3, a day ahead of Antony’s visit, the first by an Indian Defence Minister since 2006.
Antony held talks with Chinese Premier Li Keqiang, his Chinese counterpart General Cheng Wanquan and Special Representative of the India-China border negotiations Yang Jiechi on July 5 and 6.
Before that Yang and National Security Advisor (NSA) Shivshankar Menon held the 16th round of border talks on June 28 and 29 after which both sides spoke of positive progress.
Antony said despite the pleasantries, he had free and frank discussions covering virtually all aspects of the boundary problems, including the April 15 Depsang Valley incursion in which, Chinese troops pitched tents. It was resolved after a 20-day fracas during which it became a serious diplomatic incident between both the countries.
The two sides issued a joint statement after Antony’s visit to step up interactions between the two militaries at various levels.
Antony also spoke of consensus about the management of the disputed border.
“I am happy about the outcome because there is consensus of minds, consensus in the military leadership that till we find a solution to the border dispute we must maintain peace and stability and tranquility”, he had said.
Both sides expect that the Border Defence Cooperation Agreement (BDCA) currently being discussed would come in handy in dealing with such incidents.
Antony said, “there is real forward movement on the BDCA” and is expected to be finalised within “reasonable time”.
The BDCA aims to set up mechanisms which will provide for consultations for communication so that the two sides can improve management of border.
India asserts that the dispute covered about 4000 kilometres of the border while China says it is confined to 2000 kilometres.
Posted by Nayeem Sheikh at 21:51