Defence against Home bid to take control of Indo-Myanmar border 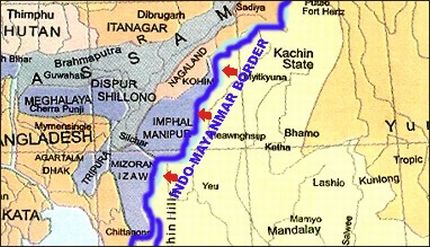 The tussle over the India-Myanmar border has flared up with the Ministry of Home Affairs reiterating that the monitoring of the Northeast frontier be handed over to it from the armed forces.
Without mincing words, the Home Ministry has said that it would raise additional battalions of BSF to man the border if the Defence Ministry refuses to hand over the command of Assam Rifles to it.
Last month, the Home Ministry had proposed “the guarding of Indo-Myanmar border by replacing Assam Rifles with BSF by raising additional 41 battalions with support and supervisory staff in BSF”. The other option, said the September 24 proposal, was “transferring the operational control of Assam Rifles from the Ministry of Defence”’.
The Home Ministry under P Chidambaram had first demanded control of the Assam Rifles in April 2010 saying that its Army command had failed in counter-insurgency operations as well as in preventing cross-border movement of Northeast militants from their bases in Myanmar. Placing the BSF, it said, would allow Assam Rifles to focus on counter-insurgency operations.
It has now reasoned that the peaceful border should be manned by central paramilitary forces like the BSF rather than the Army whose presence vitiates diplomatic ties with Myanmar, which is progressively moving towards democracy.
The Defence Ministry, however, is opposed to passing on the border to the BSF, saying that the removal of Assam Rifles would deprive the Army of terrain knowledge and operational skills that are necessary in the backdrop of a potential threat from China.
With Chidambaram now holding the Finance portfolio, the Home Ministry hopes to get financial support to raise the extra BSF battalions needed to fight its case with Defence.
The final decision will be taken by the Cabinet Committee on Security.
The oldest paramilitary force in India (raised in 1835), Assam Rifles is administratively under the Home Ministry but the Army exercises operational control over it. Following heightened insurgency, it was entrusted in 2002 to guard the 1,643-km-long Indo-Myanmar border, replacing the BSF.
Recently, Manipur endorsed the Union Home Ministry’s view that an effective guarding of the vulnerable sections of the zero line would reduce militancy in the Northeast.
Currently, the state said, the border is very porous, allowing arms and drugs smuggling and free movement of militants.
Posted by Nayeem Sheikh at 03:47