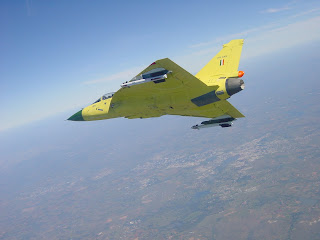 The defence ministry (MoD) has allocated an additional Rs 1,500 crore to the Tejas Light Combat Aircraft (LCA) programme, boosting its projected Rs 14,047 crore budget. The additional amount will be spent on a production line for Hindustan Aeronautics Ltd to build 20 fighters that Indian Air Force (IAF) has ordered for its first Tejas squadron. The IAF has also promised another order for 20 more Tejas for its second squadron. Once the improved Mark II Tejas is developed, the IAF will field 6-7 Tejas squadrons (120-140 fighters).
This need for additional money arises from the failure of HAL, a public sector aerospace monopoly, to establish a production line that can build at least 8 Tejas fighters a year. The production line that HAL set up two years ago on the priceless real estate that it holds in the heart of Bangalore has not yet produced a single Tejas fighter.
Briefing Business Standard the Director of the Aeronautical Development Agency (ADA), P Subramanyam, who runs the LCA programme, admits that nobody realized that setting up a production line was a technology by itself. So far, ADA and HAL have built only Tejas prototypes and limited-series aircraft, producing individual parts one-by-one like a tailor making a suit. When HAL graduated to a standardised production line, it encountered serious difficulties.
“ADA and HAL have realized that creating a production line needs major effort… That realization has come,” says Subramanyam.
So serious are the difficulties, that ADA and HAL approached foreign aircraft manufacturers last year --- including Eurofighter GmbH, which builds the Typhoon. The proposal to appoint a foreign consultant for the Tejas production line remains alive in the MoD.
Senior IAF officers express frustration that HAL has failed to set up a Tejas assembly line, even though its primary activity for the preceding decades has been to build foreign aircraft on an assembly line under licence.
Air Marshal Pranab K Barbora, who retired as the IAF vice chief two years ago, summarises the air force’s viewpoint: “HAL’s assembly line expertise is outdated by at least three decades. They have done nothing to upgrade their technology. Setting up a modern assembly line for the Tejas is far beyond HAL’s capabilities.”
Barbora says that this is why the IAF lobbied hard to post a serving air marshal as HAL chief. Instead, the MoD appointed RK Tyagi, who has absolutely no experience in aeronautical development or manufacture.
Contacted repeatedly for comments, Tyagi did not respond to calls.
ADA is defending HAL, with Subramanyam insisting that HAL would build the first 20 Tejas within 2½ to 3 years. By then the fighter would have obtained final operational clearance (FOC) in its flight-testing programme and production can begin of the next 20 Tejas (which must be built to FOC standards).
This, says Subramanyam will take another 2½ years, i.e. be completed in 2018. By then, the Tejas Mark II will be tested and ready, and can enter series production.
What the ADA chief does not explain is: how will HAL, which cannot yet build even two Tejas fighters per year, build 20 fighters over the next three years.
The annual general meeting on Friday of ADA (which is a registered society under the MoD) was also clouded by delays in flight-testing, which Business Standard has reported will delay the initial operational clearance (IOC) of the Tejas until mid-2013 at the earliest.
For the IAF, which contemplates dangerously depleted squadron numbers, the big question is: when will the first two Tejas squadrons become operational?
Going by the lack of energy in HAL --- which is struggling to build the last two limited series fighters and the first two series production Tejas ---  the IAF might have a longer wait than it is comfortable with.