IAF to now have midair refueling capacity in all Air assets 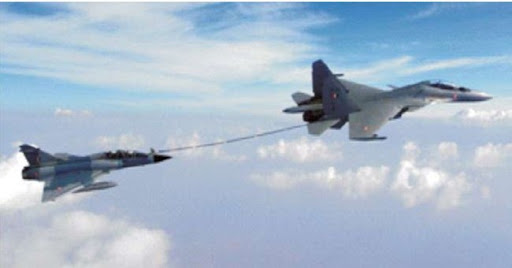 In a major step to increase its range and operational capabilities, the Indian Air Force (IAF) has decided tbat all its aircraft and helicopters will have the capability for midair refueling.
Disclosing this, the IAF vice chief, Air Marshal D.C. Kumaria, said at the Fifth National Seminar on Aerospace Technologies (N-SAT) recently that the decision applies to all its current and future acquisitions – whether combat jets, transport aircraft, helicopters or other assets.


Only aircraft with this capability will be considered for acquisition in future, he observed adding that technology and strategic requirements have evolved over time and that the IAF decision is in line with the current thinking in military aviation worldwide.

The N-SAT series on military aviation is held by India Strategic defence magazine (www.indiastrategic.in) annually. It lays emphasis on a building technological edge for the Indian armed forces, and significantly, most participants agreed that if an air force was not thinking of 20 years hence, they it is already behind the times.

In the late 1970s for instance, Air Marshal Kumaria pointed out, the IAF actually sought removal of aerial refueling plumbing from the Anglo-French Jaguar aircraft even though they were meant for a deep penetration strike role. Today, whether it is the long-range aircraft or helicopters, aerial refueling capability is a key requirement.

The existing Mirage 2000s, Sukhoi Su-30 MKIs and Jaguars already have this capability while on the Mig 29s, its plumbing will be activated during upgrades for midair refueling.
According to defence analyst Air Marshal (retd) Ashok Goel, the inflight refueling capability is standard worldwide now and it would, in fact. cost more to remove it than to have it while acquiring and inducting new aircraft.

All NATO and US aerial assets, for instance, are equipped with midair or in-flight refueling capability and in the Gulf and Afghanistan operations, aircraft were able to conduct multi-mission strikes during single flights.

“This in-flight refueling capability,” Air Marshal Goel told India Strategic, “literally has far-reaching implications, enabling modern aircraft to cover long distances 360 degrees.”
Thanks to the IAF’s Il-78 midair refuelers, its Su-30 combat aircraft have gone up to the US in 2008 to take part in the multi-national Red Flag exercise, and will again do so in 2013, he said.
It may be noted that midair refueling capability will also be on board army and navy combat assets as the Chief of Staff Committee already has a tri-Service agreement on common parameters for same and similar systems needed by them.

The committee is currently headed by the IAF chief, Air Chief Marshal N.A.K. Browne, and he is on record as having said that there are no differences between the three Services on acquiring common systems with same or similar requirements.
Army sources also told India Strategic that it will follow IAF’s Air Staff Qualitative Requirements (ASQRs) while going in for the Apache combat helicopters.
Posted by Nayeem Sheikh at 02:08