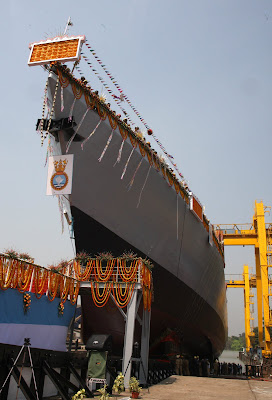 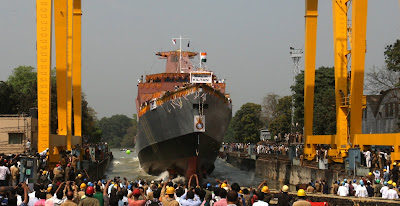 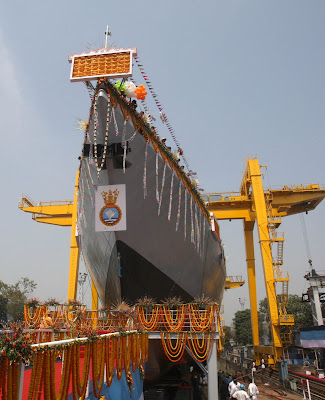 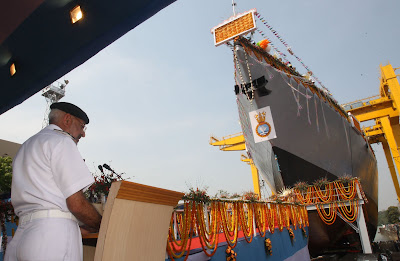 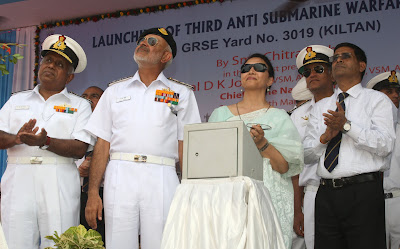 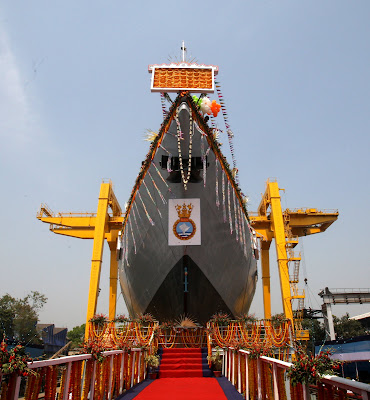 Major step towards indigenisation and making the Navy self-reliant

In a major step towards indigenisation and making the Navy self-reliant, the third anti-submarine warfare (ASW) corvette, designed under the ambitious Project-28 (P-28) by the Navy’s Directorate of Naval Design, was launched in Kolkata on Tuesday.
Aimed at enhancing the Navy’s underwater warfare capabilities, the warship, in a first of its kind, will be fitted with indigenous state-of-the-art weapons and sensors, including a medium range gun, torpedo tube launchers, rocket launchers and close-in weapon system.
Being built by one of India’s leading shipbuilders, Garden Reach Shipbuilders & Engineers Ltd. (GRSE), it has been named after an island — Kiltan — in the Lakshwadweep archipelago of India. It was launched by Chitra Joshi, wife of the Navy Chief Admiral D. K. Joshi. Admiral Joshi and Chairman and Managing Director of GRSE Rear Admiral (retd.) A.K. Verma were present.
With nearly 90% indigenisation content, the building of the corvette was a major initiative, Navy officials said.
The first GRSE-built ASW corvette, Kamorta, is expected to be delivered to the Navy by this year-end. It was launched on April 19, 2010 and had suffered a delay of nearly one year.
The remaining ships, according to GRSE, will be delivered by 2016. The fourth ASW corvette will be launched in 2014 and built, fitted and tested and delivered to the Navy in little over 20 months, the officials said.
Technological landmark
While lauding the efforts of GRSE in detail designing of the ship, Admiral Joshi singled out its technological landmark, as being the first ship in the country built with a composite superstructure of carbon fibre composite material, which will be successfully integrated with the main hull. Besides reducing the top weight, it would provide improved stealth features and reduce life cycle maintenance costs.
The hull form would be highly efficient with excellent sea-keeping and manoeuvrability characteristics having an overall length of 109 metres. The ship can cut through the sea at a very high speed of 25 knots. The advanced stealth features would make it less susceptible to detection and help in effective deployment of soft kill measures.
The Navy Chief said global economic slowdown had opened up opportunities for India’s defence ship-building yards. Economic recession had led to shutdown of many companies and the surplus capacities were being shifted to emerging economies like India.
Admiral Joshi said the ultimate test would be the country’s ability to export its products.
Out of 42 orders given by the Navy, 40 were being built indigenously by public or private sector enterprises. “Today, the Indian Navy and the Coast Guard have huge requirement of ships and the same are required to be produced without any time and cost overrun. Timely delivery of quality ships is the need of the hour. Modern shipbuilding technology and tools must be adopted to achieve this objective,” Admiral Joshi said.
Posted by Nayeem Sheikh at 20:57