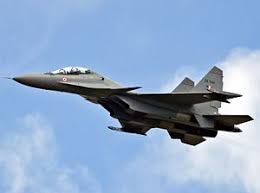 Twenty-five years after deciding to set up a base for combat planes in Thanjavur, Indian Air Force is all set to operationalise its first and only fighter base in south India on May 27.
To be inaugurated by Defence Minister A K Antony, Thanjavur will house a squadron of air-dominance Su-30 MKI fighters by 2017-18 when the required number of platforms will be available.
Till then the IAF will send detachments of Su-30MKI and other planes from other stations as the runway and other associated facilities are at place in Thanjavur.
The base is meant to provide air defence to sensitive installations on the coast, including nuclear power plants and strategic assets. It will give an additional strategic dimension to India’s air power as the fighters will be able to fly up to the Andamans and Lakshdweep more frequently in demonstrating India’s air dominance on the ocean.
India has contracted 272 Su-30MKI from Russia for licence produced at Hindustan Aeronautics Limited, Bangalore.
So far close to 170 platforms were inducted out of which Pune and Bareilly have two squadrons each while Tezpur, Chabua, Halwara and Jodhpur have a squadron (16-18 platforms) each.
A new Su-30 MKI squadron is coming up at Sirsa in Haryana. Moreover, Tezpur, Chabua, Jodhpur and Halwara will get a second squadron after which Su-30 MKI platforms for Thanjavur will be earmarked.
Incidentally, Antony will inaugurate the new base within a week of Chinese premier Li Keqiang’s maiden India tour during which he indicated that China would continue its infrastructure modernisation in Tibet and Xinkiang, which could also be used for rapid military mobilisation in case of any need.
Thanjavur base could have been realised much earlier if the IAF did not shift its plans twice after agreeing to convert it as a fighter base way back in 1987. Existence of two runways of 1942 vintage was a determining factor.
After receiving sanction from the Defence Ministry in 1989, the IAF went back on its plan in 1993, projecting Thanjavur only as a care and maintenance hub. Within six years, the previous plan was turned upside down as the IAF pitched for a fighter base in Thanjavur in 1999, the Comptroller and Auditor General said in a report in 2010.
Taken up as a “special project”, completion of the base picked up momentum only after 2003 when the Defence Ministry reviewed and sanctioned additional funding. Now the base has hangers, fuel dum, and repair depots for supporting the fighters.
Posted by Nayeem Sheikh at 03:20