Short-range air-to-air missile. The development of a highly maneuverable K-73 melee airborne missile - like the development of a K- 60 rocket - started by the Molniya Design Bureau (OKB- 4 MR Binovat) according to the Decree of the USSR Council of Ministers on July 26, 1974. Chief Designer - MR Bisnovat. According to the initial design, the rocket was created without taking into account the full range of the GOS and only with gas-dynamic control. I planned to use Probably a modified rocket of GOS the K-60 . After the choice of the all-perspective GOS "Mayak" of the Arsenal software development, a modern aerodynamic scheme with a change in the rocket dimensions was adopted at a meeting under the leadership of the Deputy Chief Designer of the rocket GPP Dementiev.This adjustment of the project probably took place in 1976. In 1977, after the death of MR 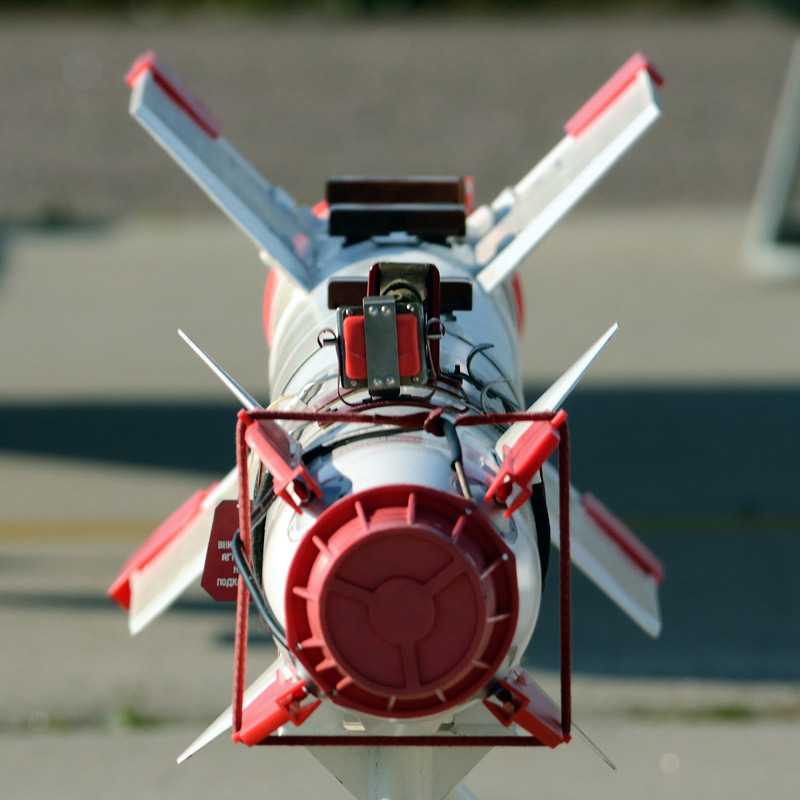 Educational-acting model of the R- 73L with an optical fuse. Exhibition of technology of The in Ramenskoye, the 100th anniversary of the Russian Air the Force, 12.08.2012 (photo The - of pfc-joker is, http://pfc-joker.livejournal.com ). 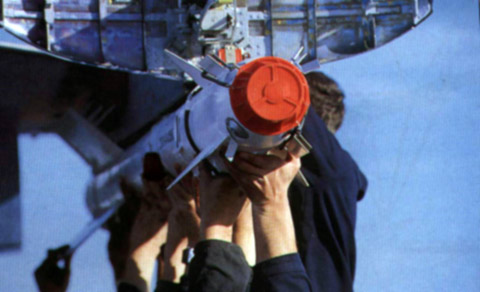 
1981-1982 with In work on the Conditions creation of air-to-air Missiles, the which Were conducted by OKB Molniya, WAS Transferred to the Vympel OKB. Gennady Alexandrovich Sokolovsky (to 1994) was appointed Chief Designer. The missile was commissioned as R-73 by the Decree of the Council of Ministers of the USSR of June 22, 1984 and the order of the USSR Ministry of Defense No. 00113 (1984). The beginning of mass production (model P-73 MDR-1) - 1987. The model of rocket 73RMD P-2 has the ability to launch into the rear hemisphere of the carrier and can be used against air-to-air missiles. The chief designer of the rocket since 1994 - Yu.K.Zakharov.

Serial production of the R-73 missiles began in 1983 and until 1992 carried out by was the Tbilisi Aviation Plant (Tbilisi, Georgia), and at the Moscow Kommunar plant ( East - Tymchuk D.. A total of 6,000 rockets were manufactured in Tbilisi. In the 1990s, probably the production of missiles for export and, possibly, for the Russian Air Force was conducted by pilot production of the Vympel GosMDB. As of the end of the 1990s - the beginning of the 2000s, the repair and maintenance of the missiles is carried out by the 711th aircraft repair plant in the city of Borisoglebsk.

Rocket R-73 :
Design - the rocket is made according to the aerodynamic "A duck" the scheme. Aerodynamic angle sensors (angle of attack and slip), destabilizers and aerodynamic control surfaces are located in the nose. In the tail - wing with ailerons. The rocket is also equipped with four- section gas-dynamic rudders.

In the technical specifications for the creation of an ultra-maneuverable rocket - with the possibility of reaching angles of attack of about 40 degrees - it was proposed to use gas -dynamic control due to the inefficiency of conventional rudders. The initial version of the rocket project did not provide for aerodynamic controls - only gas-dynamic.It was supposed to use wingless body with a tail stabilizer of 6 aerodynamic surfaces. 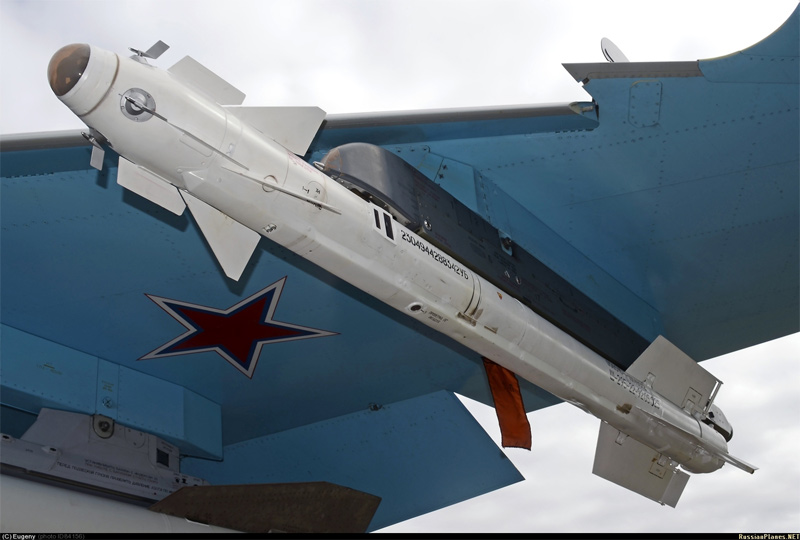 The combat training model of the R- 73L missile with an optical fuse under the Su- 34 bort No. 05 is red. Exhibition of technology in Pushkin, August 2012 (photo The - of Yevgeny Polivanov, http://russianes.net/id84156 ).

Steering machines work on the working body, which is produced by a solid gas generator. The working body enters the tail section through a special channel located outside the rocket body.

Educational split model of the R-73 rocket. From left to right: tail section with engine interceptors and aileron steering, third, second and first compartments. UEFA Training Aviation Personnel Lipetsk Military and the Test Center of the Russian of Ministry of Defense named is the after the VP Chkalov, 01.27.2012 (photo The - Vitaly Kuzmin's, http://vitalykuzmin.net ). 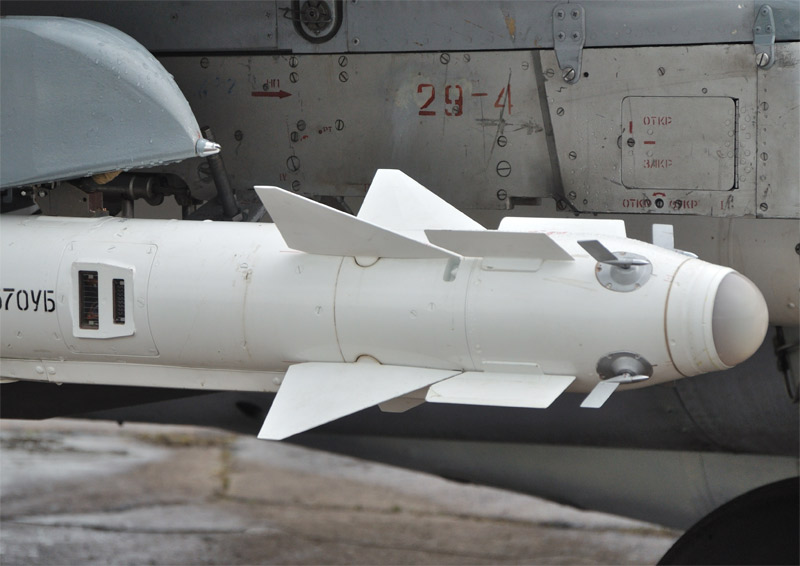 GOS and aerodynamic controls of a combat training missile R-73L. Of technology in Exhibition Exhibitions Pushkin, 02.06.2012 (photo The - of pfc-joker is, http://pfc-joker.livejournal.com ).

Guidance system and the Control - the missile control system includes an autopilot with roll Stabilization and an IK profile of GOS. The roll stabilization is carried out by mechanically connected ailerons.

At the stage of preliminary design of the K- 73 rocket, the use of the full- range IR GOS was not expected. The development of the GOS was carried out by the Kiev software company Arsenal (chief designer - AV Molody) on a competitive basis with the NPO Geofizika (Moscow). The Arsenal software was developed as a compact and all-view GSN Mayak / OGS MK- 80 (RMD-2). The Mayak also implemented new effective measures to combat natural and man-made interference. Along with the appropriate selection of the sensitivity range of the photodetector, a pulse-time modulation of the signal was used in the GOS equipment, a digital signal processing unit was introduced with several independent channels.Improve efficiency by the To Hitting the more vulnerable and by important elements of the target, aiming AT Been a point has an applied, Shifted forward relative is to the nozzle of the engine of the aircraft's target. The original version of the K-73 missile was redesigned for this hsn.

The homing head of the RMD-2 missile has increased noise immunity against IR countermeasures and is built on a digital element base, which makes it easy to reprogram tracking and interception algorithms. Improved ability to attack low-flying targets . It is with the RD-73 RMD-2 rocket that a maneuver is possible with launching a rocket into the rear hemisphere of the carrier and it is possible to attack enemy air-to-air missiles.

On the MiG-29 and Su-27 aircraft, the missiles can be used together with the slit of the target designation system, the Schel, which significantly increases the combat capabilities of the fighter.

In the 1990s, at the arms exhibitions, Vympel Design Bureau displayed footage of K-73 missile tests with a launch backwards - in order to defend strike aircraft and bombers. 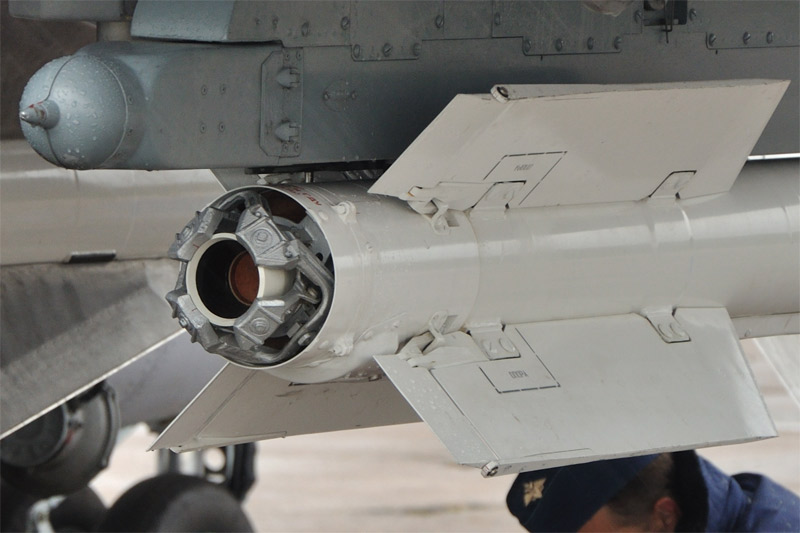 Gas-dynamic controls and ailerons training and combat missile R-73L. Art exhibition at the Pushkin, 02.06.2012 (photo - of pfc-joker is, http://pfc-joker.livejournal.com ). 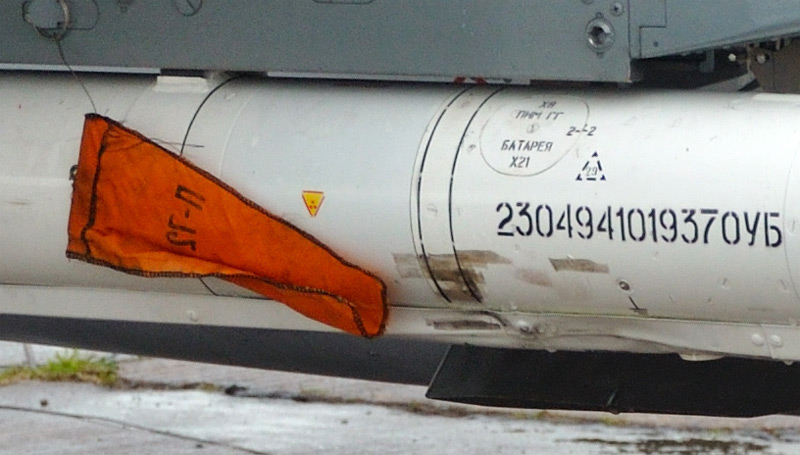 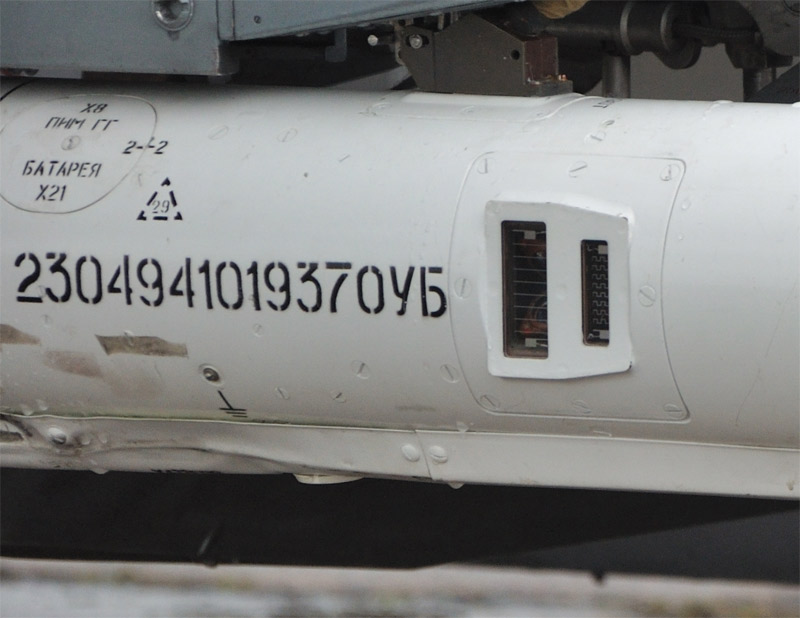 Educational-acting samples of R-73L optical fuze and P-72 with radio. Art exhibition in Ramenskoye, the 100th anniversary of the Russian Air Force, 12.08.2012 (photo - of pfc-joker is, http://pfc-joker.livejournal.com ).


Modifications :
- K-73 (preliminary design) - the initial version of the K- 73 was performed as a super-maneuverable missile without aerodynamic controls. GSN - either the development of NPO " Geophysics" or software "Arsenal" (GSN "Mayak"). 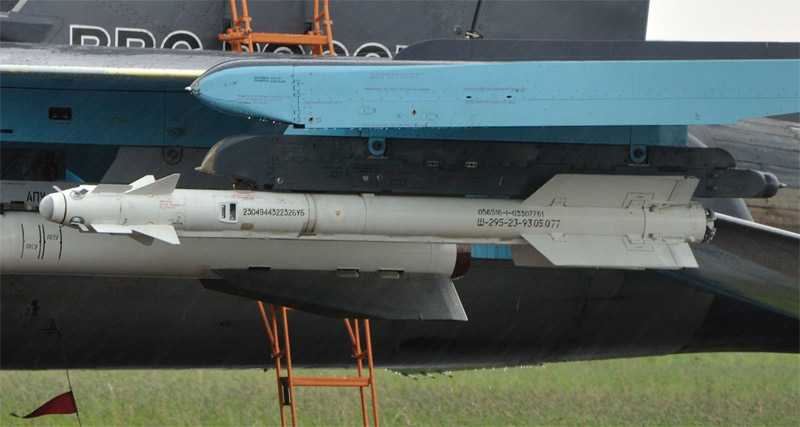 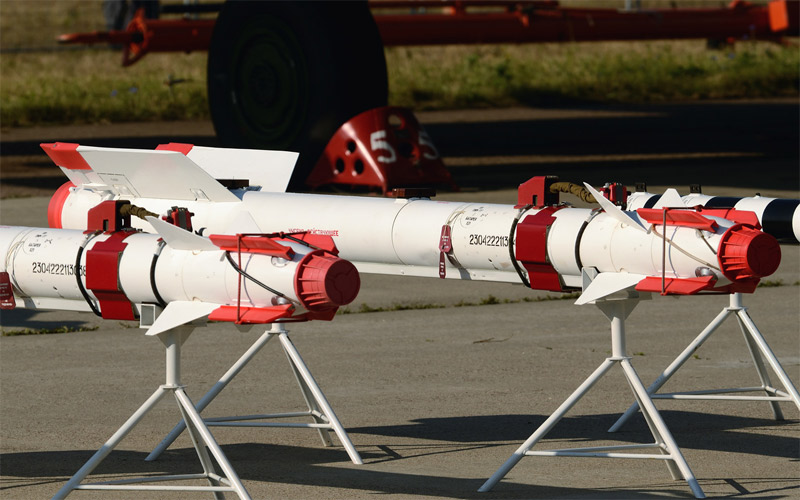 Educational-working model P-73L missiles with an optical fuse. Art exhibition in Ramenskoye, the 100th anniversary of the Russian Air Force, 12.08.2012 (photo - of pfc-joker is, http://pfc-joker.livejournal.com ). 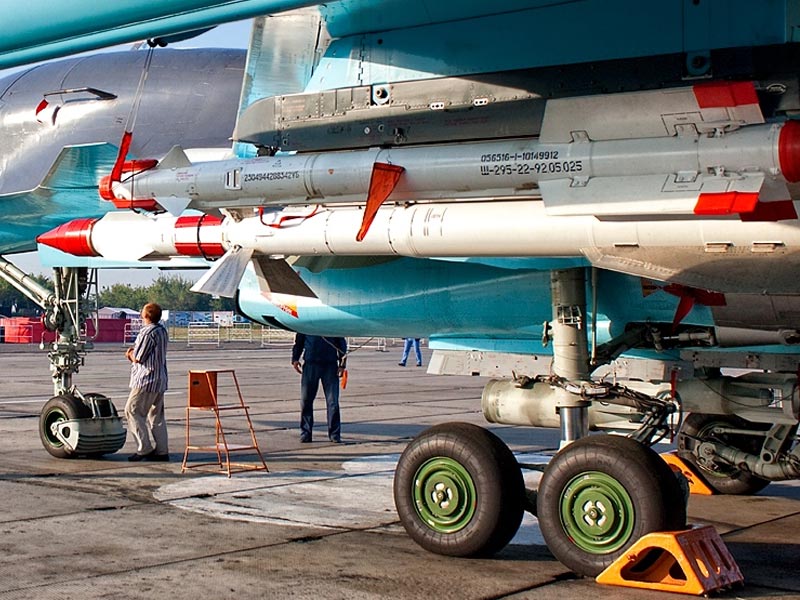 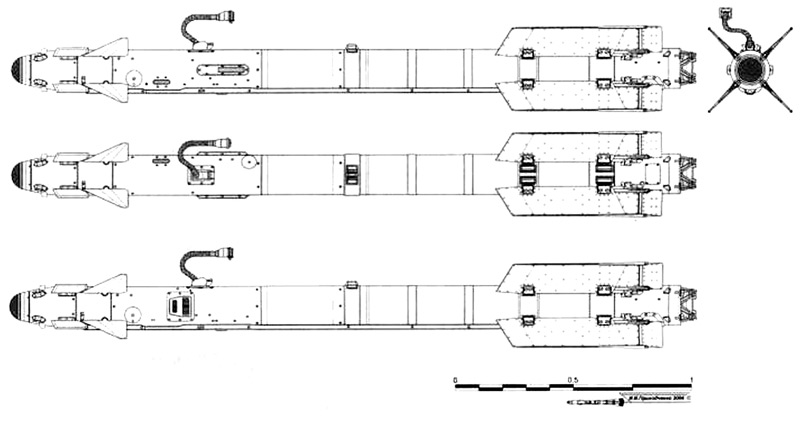 Projection of R-73 - P-73 radar fuze side and top views, P-73L with optical laser fuse is a side view (Figures IVPrihodchenko 2006, http://vadimvswar.narod.ru ).

- R-73m / F-73 MDR-2 - a variant of the rocket with improved performance characteristics and a new homing vessel (with the characteristics of the GOS Mayak), was first shown at the MAKS- 1997 airshow. According to the data from the exhibition - rocket tests started at the end of 1994, the rocket is ready for mass production . In general, the creation of the K - 73 modification with an extended defeat zone was initiated by the decision of the military-industrial complex under the USSR Council of Ministers on February 13, 1984. Later, the work on the rocket was set by the Resolution of the USSR Council of Ministers on December 28, 1984 In 1988-1989. made the first 16 prototypes of new missiles.The model of the R-73 RMD-2 rocket has the ability to launch into the rear hemisphere of the carrier and can be used against air-to-air missiles.

- K-74ME - export version of the R-73M, probably with a simplified guidance system. First shown at the air show MAKS-1997. 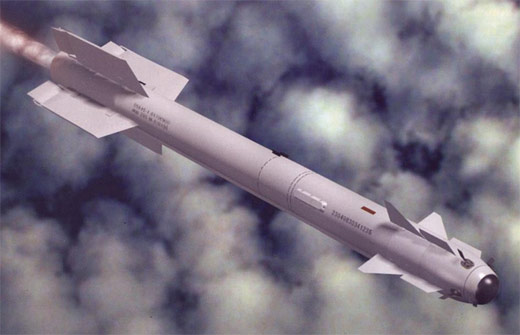 Rocket R-74ME (drawing ICB "Vympel").
- R-73K - the name of the R- 73 missiles with a radar proximity fuse. The name is sometimes used.
- RVV-MD - probably the updated version of the R-73M / R- 73 missile RDM-2. Developed by GosMKB "Vympel" in the late 1990s - early 2000s. The version of the RVV-MDL rocket is equipped with an optical laser non-contact fuse. The name RVV-MD was first mentioned in the annual report of GosMCB Vympel in 2007. And for the first time, the model of the rocket was shown to the public at the MAKS- 2009 air show. Some sources indicate that the version of the rocket was created as the "second stage of modernization" of the R- 73 rocket.

- UZR-73 - teaching and recording with a recorder - rocket simulator, used for training purposes.

- "R-73UB" (conditional name) - training and combat version of the missile, equipped with a real warhead and onboard systems.

- "R-73UD" (conditional name) - a training version of the missile, without a warhead and possibly without an engine, but with onboard systems. 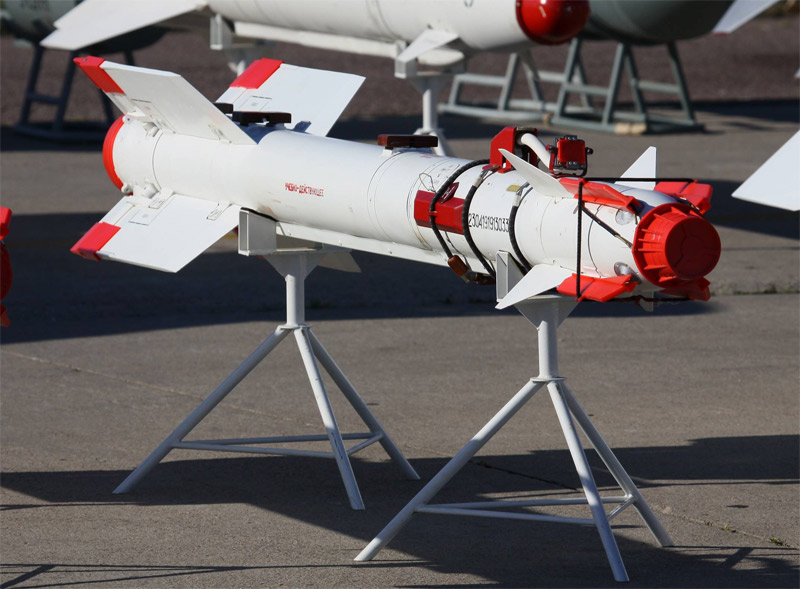 Educational-acting model of the R-73 rocket with a radio fuse. Exhibition of technology of The in Ramenskoye, the 100th anniversary of the Russian Air the Force, 12.08.2012 (photo The - Evgeny Erokhin,  http://missilesgo.co.uk ).

The R-73 missiles on the far underwing pylons under the MiG- 29, mid-late 1980s (photo from the archive Cabal, http://militaryphotos.net ). 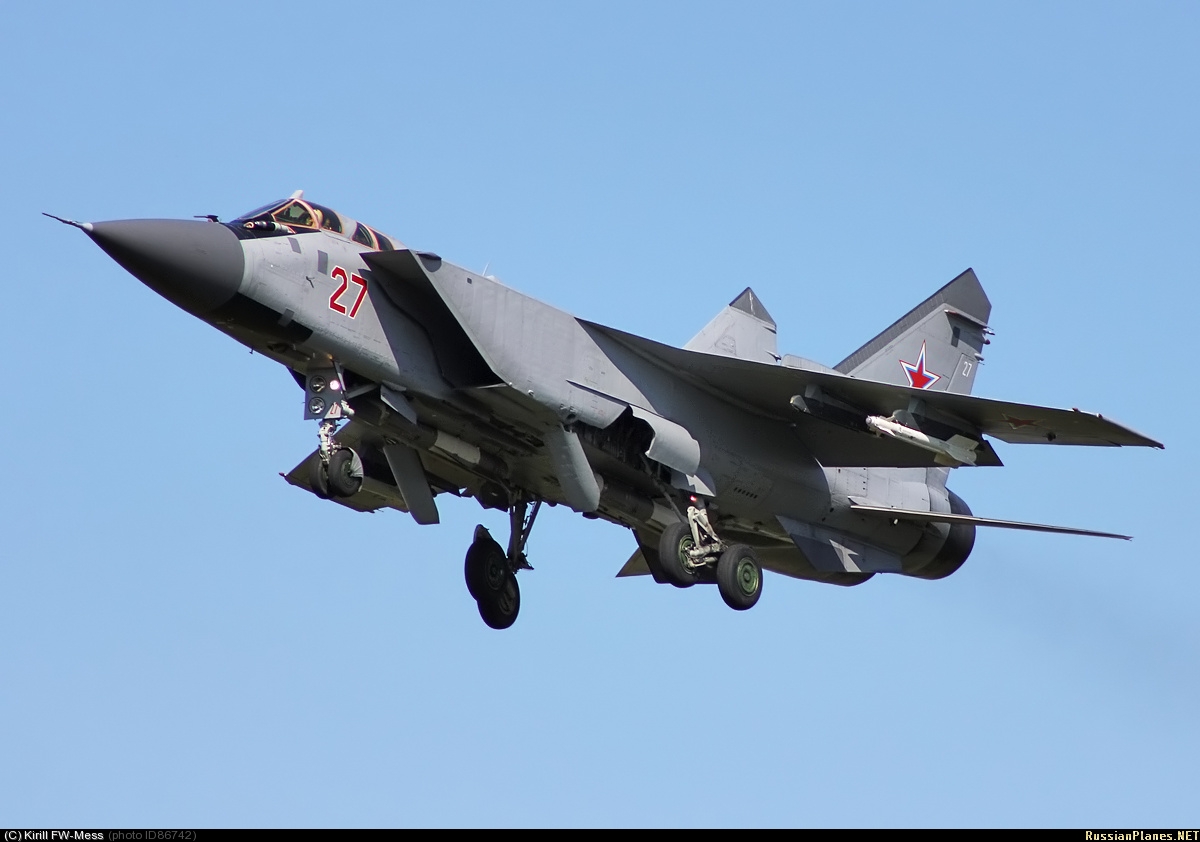 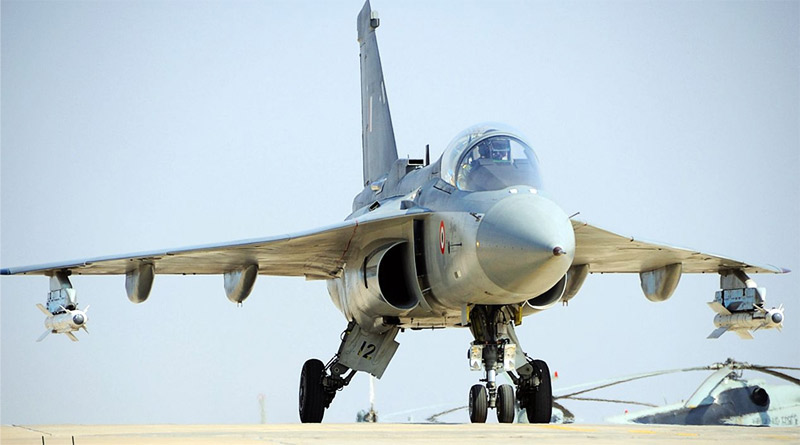 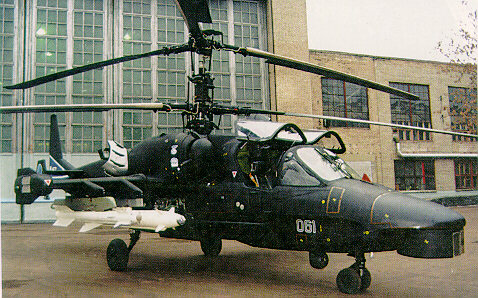 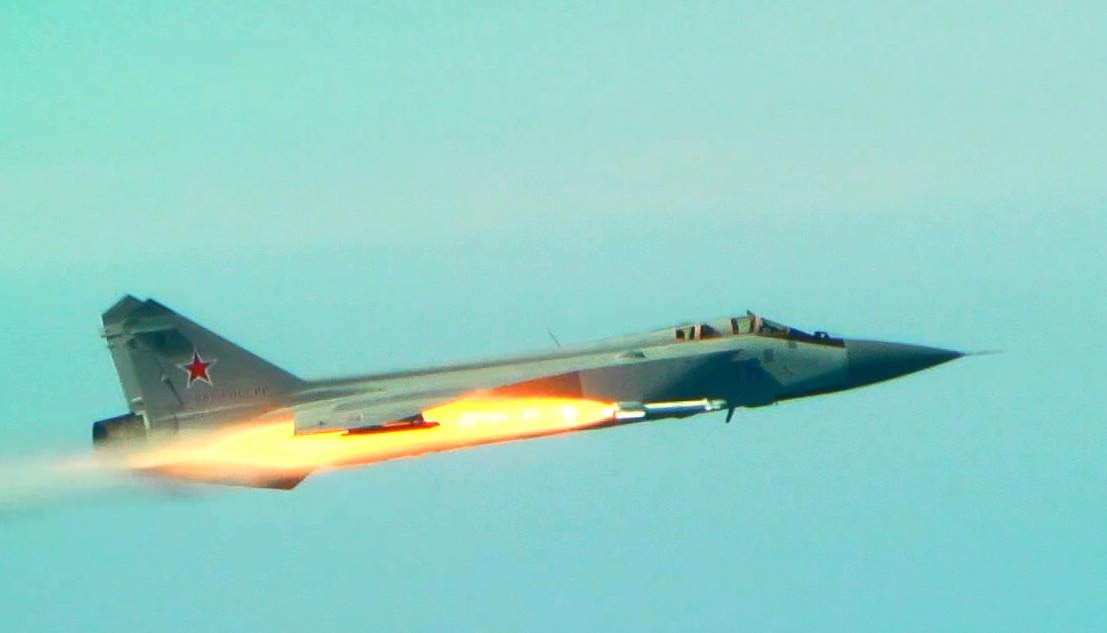 Hungary - up to 2010 took place the delivery of missiles.

Vietnam - until 2010 there were deliveries of missiles. 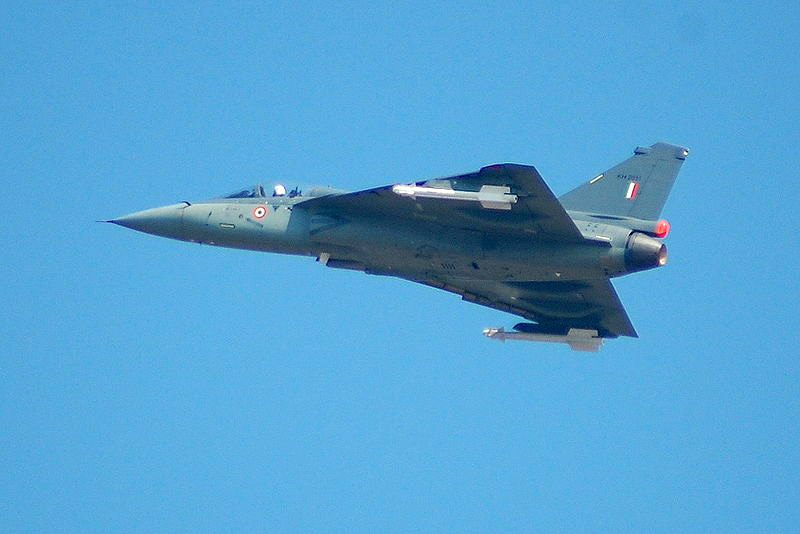 R-73 rockets or their models under the Tejas, India fighter. Photo no later than April 2010 ( http://www.indiandefence.com ).

Eritrea:
- 1999-2010 - Delivered AT Least 5 missiles.
Ethiopia - until 2010 there were shipments of missiles.
Africa South:
- 2001 - Vimpel GosMCB has embarked on a new direction in the work - experimental design work on the integration of missiles on foreign-made aircraft. The integration of the R-73E rocket into the aircraft of the South African Air Force "Mirage F1" was shown at the Moscow Aviation and Space Salon MAKS- 2001. 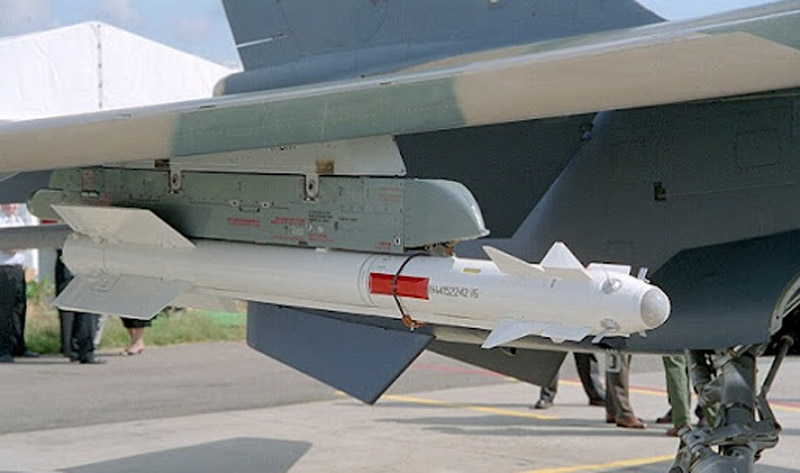 The R-73E missile under the Mirage F1CZ aircraft of the South African Air Force, MAKS- 2001 show air ( http://bayourenaissanceman.blogspot.com ).
Yugoslavia - the first deliveries were made before 1993.