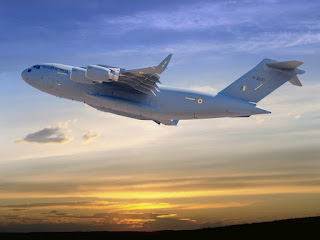 The third Boeing [NYSE: BA] C-17 Globemaster III airlifter for the Indian Air Force (IAF) departed for India Aug. 20 from the company’s Long Beach facility.
It joins the first and second India C-17 airlifters, which arrived in June and July, respectively. Boeing is on track to deliver two more C-17s to the IAF this year and five in 2014.
In operation since 1991, the C-17 is a large, versatile military transport aircraft able to carry heavy, oversize loads long distances and land on rough and unprepared surfaces. It has been used in humanitarian and military missions around the world and recently surpassed 2.6 million flight hours.
Boeing has delivered 256 C-17s, including 222 to the U.S. Air Force and a total of 34 to Australia, Canada, India, Qatar, the United Arab Emirates, the United Kingdom and the 12-member Strategic Airlift Capability initiative of NATO and Partnership for Peace nations.
Posted by Nayeem Sheikh at 23:04