I have received a ton of email asking me to comment on the reports that the German Eurofighters sacked numerous F-22s during recent dissimilar air combat training (DACT) and Red Flag Alaska exercises. Both the EF2000 and the F-22 are fine machines in their own right, and once again I cannot stress enough how inconsequential these reports are without knowing the exact rules of engagement for each sortie and the circumstances in which these kills took place. I have read “expert commentary” on other websites and forums regarding these and other air to air training events where the F-22 was subsequently beaten by an inferior foe and every time I walk away laughing or frustrated. Cocky remarks, HUD tape stills, or fake kill markings mean literally nothing. Just because someone says they simulated a missile or guns kill on an F-22 does not mean either type of aircraft involved is superior or inferior. Do folks honestly think that the F-22 can teleport between dimensions or something? Do they think the USAF made first contact with the Klingons and they gifted the boys in blue a cloaking device for the Raptor’s sake? The Raptor is a fighter jet, albeit a very capable fighter jet, not a magical dragon. It is not in any way totally impervious to detection as the mainstream media often alludes to. The F-22 is detectable by radar but at much shorter ranges than its non-stealthy counterparts, especially when X-band air to air type radars are concerned. And most importantly it is not invisible to the naked eye directly before, during, or after it merges with opposing fighters. 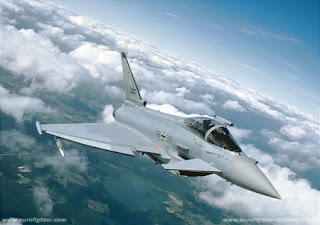 Within visual range, a place the F-22 would rather not find itself during actual combat, the aircraft has an incredible ability to point its nose at an enemy aircraft via huge flight control surfaces and two-dimensional thrust vectoring. Yet still, in a time of prolific helmet mounted sights and high off bore-sight infra-red missiles, such maneuverability is not a cure-all to an aircraft’s dog-fighting vulnerabilities. The F-22 was robbed of its planned next generation helmet mounted sight during its later development and funding stages and the JHMCS apparently cannot be reworked to suit the Raptor’s unique needs, so the state-of-the-art Raptor still packs around AIM-9M Sidewinders which are incapable of high angle off bore-sight shots. The German Eurofighters on the other hand pack the highly capable and modern IRIS-T short-range (but longer than the Sidewinder series) missile. During a “turning fight” all the Eurofighter pilot has to do to kill their enemy is to maneuver the nimble fighter into a position where he or she can simply look at the bandit, even up to almost 90 degrees off the jet’s center axis, acquire a lock and fire. This means that almost the whole 180 degree frontal hemisphere of the highly maneuverable Typhoon is deadly, whereas at this time the F-22′s forward close in missile engagement envelope is much more narrow in comparison. Additionally, the IRIS-T has a far wider viewing area with its imagine infra-red sensor bore-sighted, thus the missile is much more capable than the AIM-9M even when not aided by a helmet mounted sight. The Raptor is finally slated to get a helmet mounted sighting system in the next couple of years which will allow it to carry the latest AIM-9X high off bore-sight imagining infra-red missile and employ it to its maximum potential, including a novel lock-on after launch capability. The long-awaited addition of the AIM-9X and helmet mounted sight to the F-22 weapon system, combined with the Raptor’s exiting thrust vectoring capability, should allow it to reliably vanquish anything within the close in air to air realm in the very near future 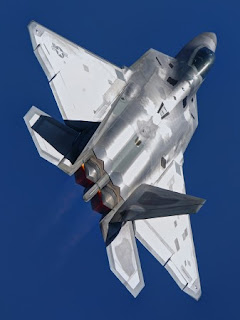 On the long-range side of the equation, the F-22 packs the AIM-120 AMRAAM (C7 model now, and D model soon) series of beyond visual range air to air missile and the APG-77 low probability of intercept AESA radar. The German Typhoon sports the mechanically scanned array CAPTOR radar and also the AIM-120 (I believe they still carry the B model AMRAAM) series of beyond visual range air to air missiles, and to my knowledge the longer range and highly capable Meteor is not in service with German forces just yet. As far as the same “experts” discussing the value of the German Typhoon’s PIRATE infra-red search and track system’s ability to detect the Raptor passively at long ranges, this analysis is totally worthless as the German Eurofighters were not delivered with PIRATE installed. Both the Raptor and the Eurofighter have higly capable radar warning receivers and electronic warfare suites, yet the Raptor’s ALR-94 is the gold standard of such avionics and would detect the Eurofighter from far away as the Germans attempted to actively search for the almost electronically silent F-22 using their radar sets. Even if the German Eurofighters were to be equipped with the long range Meteor missile, they would still have to detect and lock up the Raptor in some fashion at a very long distance.  If such an event does come to pass, it would occur at a much closer range than the Meteor is capable engaging in the first place, thus eliminating the advantage of the Meteor when it comes to mock combat against the F-22. The reality is that the second the F-22 has been detected the pilot will know they have been seen and can return fire or run. It all comes down to choices, and the Raptor’s unique capabilities allow the F-22 pilot to have an abundance of them throughout almost any combat scenario.

In all likelihood during a 1v1 engagement between the Raptor and German Typhoon, without data linked targeting information from off-board sensors, the German Eurofighter would have blown up dozens on miles before it would have had a chance to detect and especially engage the F-22. The Raptor, sporting it’s APG-77 LPI radar could detect the Eurofighter at long-range, most likely without being detected conclusively by the Eurofighter’s radar warning receiver. Or the Raptor could just wait till the Eurofighter turns on their radar or any other energy emitting component, at which time their position would be given away and the Raptor pilot could choose to evade, investigate further or attack. In the near future the F-22 will be able to launch the much upgraded AIM-120D AMRAAM at ranges approaching that of the ramjet powered Meteor. Also I have to note that using stated ranges for air to air missiles is a bit ridiculous as it does not take into account the many factors that affect such a munition’s range like the speed, vector, and altitude of both the shooter and target. Additionally, I have been told more times than I can remember that the publicly stated ranges of air to air missiles are almost totally bogus and highly underestimated for operational security reasons.

F-22 pilots, just like Eurofighter pilots, need to train for within visual range contingencies. In doing so, various scenarios are put in place to maximize the training benefit, such as starting from an offensive, defensive or neutral position and limiting what weapons are allowed to be simulated during each unique sortie. Further, the Raptor does nobody any good flying around undetected when basic fighter maneuvers (BFM) are to be practiced. For such a flight they could have packed their radar accelerometers. By doing so they could be more easily detected by the opposing aircraft, thus making it easier to set up the training scenario and to provide positive radar locks throughout the maneuvering flight. Also, believe it or not there are novice F-22 pilots just as there are novice F-16 and F-15 pilots. I have been told many times by Raptor crews that it simply takes time to master the jet’s unique thrust vectoring capabilities in the within visual range air combat regime. As has been proven over and over again throughout history, hours in the jet matter when it comes to winning in a traditional “dogfight.” Even today an F-5 Tiger can reliably smoke a Block II Super Hornet within visual range when flown by an experienced pilot. The Typhoon is a seriously hot machine, and the aircraft is extremely deadly even in a newly minted pilots hands. Put that same weapon system in the hands of a seasoned Luftwaffe fight jock and anything in America’s fighter inventory would be seriously challenged when fighting up-close and personal. Put a young pilot in the cockpit of even a state of the art F-22 and pit him against a seasoned Eurofighter pilot in the within visual range fight, and I would bet on the experienced German jock long before these reports surfaced. It takes a lot of hours to master a jet in the realm of three dimensional jousting, the F-22 is absolutely no different, especially when it comes to multiple aircraft engagements and known vulnerabilities when operating in the “post stall” thrust vectoring environment.

So did the German Eurofighter pilots really have “Raptor salad for lunch” as they have claimed? Are those fresh Raptor kill markings painted on their jets based on fact as opposed to fiction? Sure why not?  But that “Raptor salad” was probably devoured during engagements where the Raptor was well within visual range from the time the “fights on” call was made. If I am indeed wrong I challenge the Eurofighter community, who are clawing for international sales, to prove it. Oh and if the Raptor put red stenciled “kill marks” on its nose for every viable opponent it has fake-splashed during that same exercise I think Raptor crew chiefs would have run out of paint. The Eurofighter is a fantastically maneuverable machine and can fight the Raptor within visual range to maximize the airframe’s comparative advantages regardless of how limited those advantages may be. Sometimes your opponent makes a mistake, does not see you, or they are just out-fly you and they land a great shot, that is just the game of jousting in the aerial domain. Dramatic HUD camera stills, bogus kill markings, and hyped up hyperbole are just promotional tools and ego boosters. Grow up Luftwaffe and all the fan-boys out there who try to make something out of nothing.
Posted by Nayeem Sheikh at 00:43